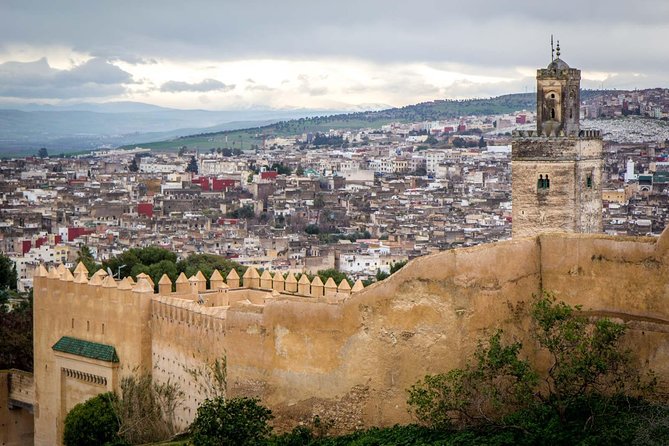 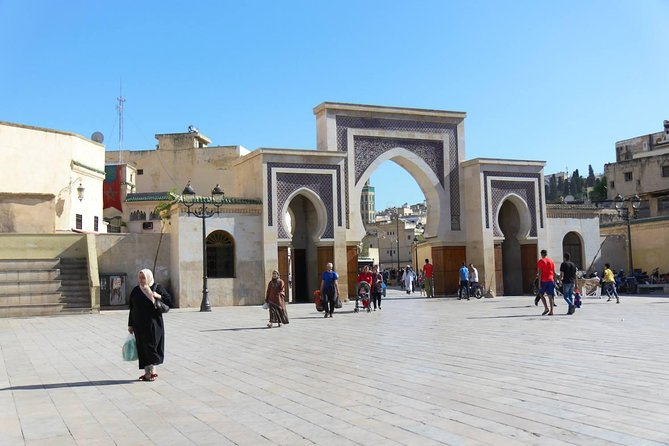 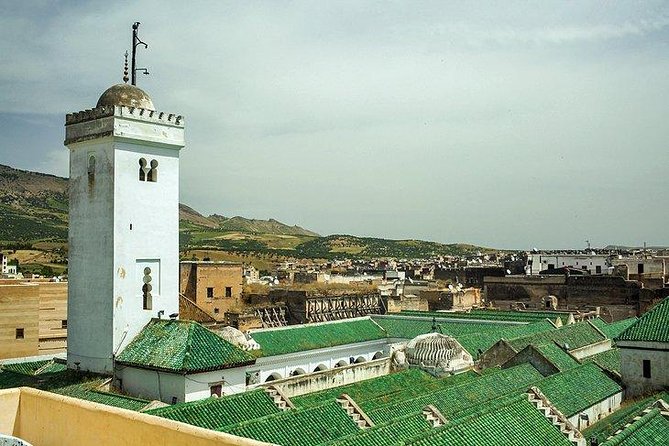 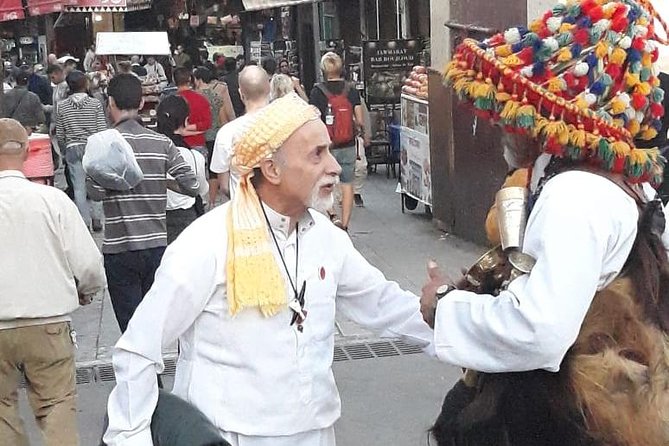 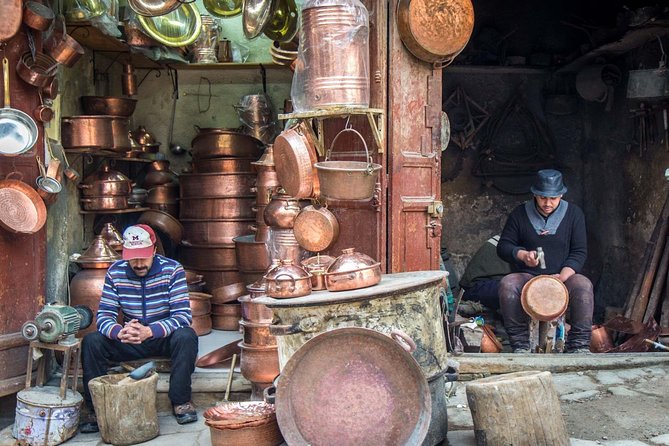 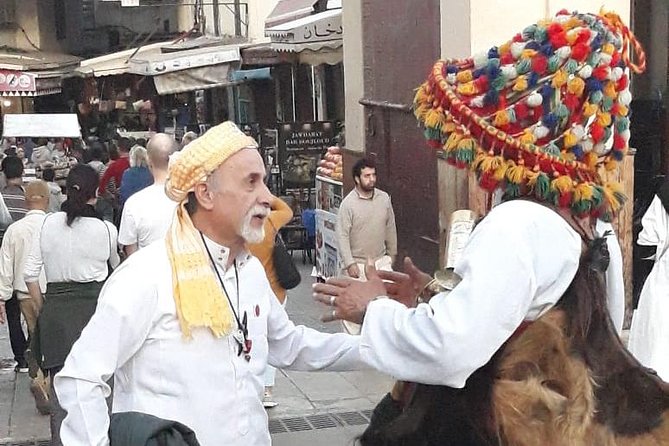 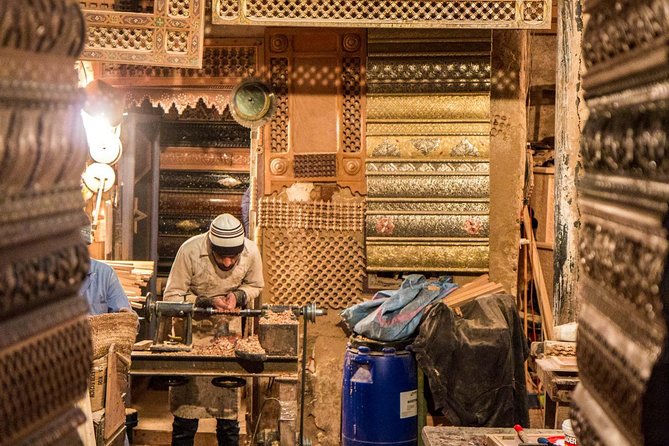 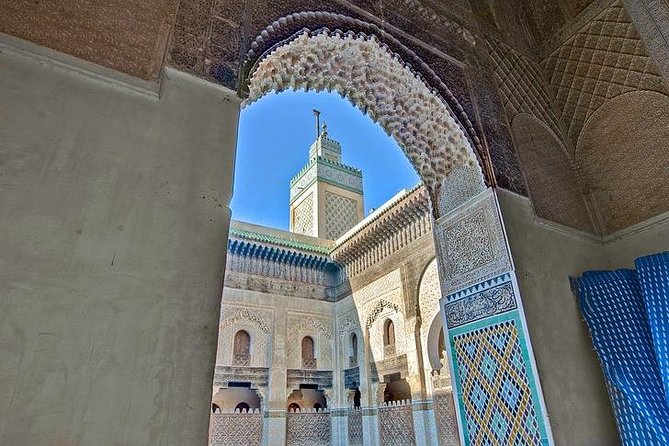 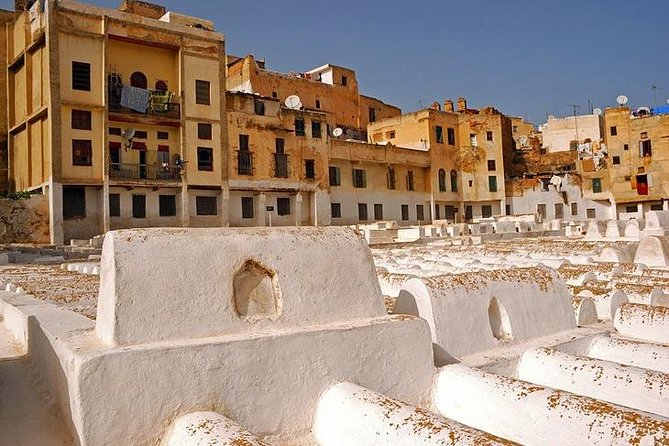 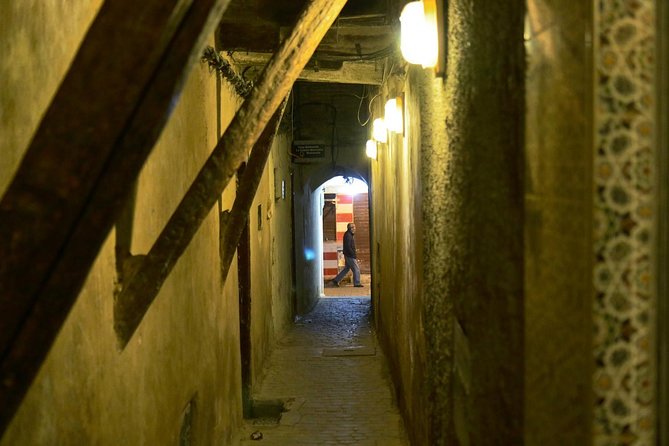 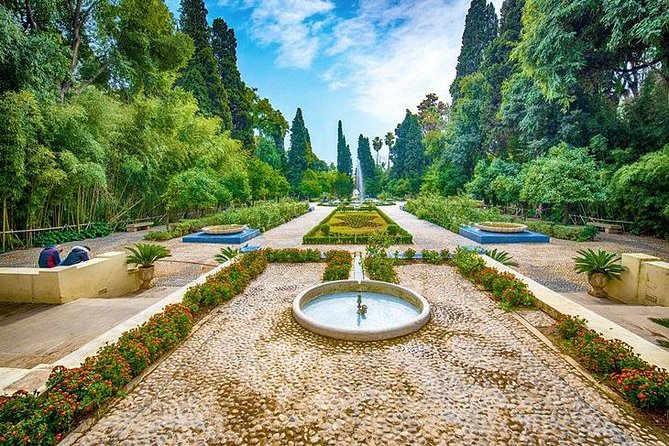 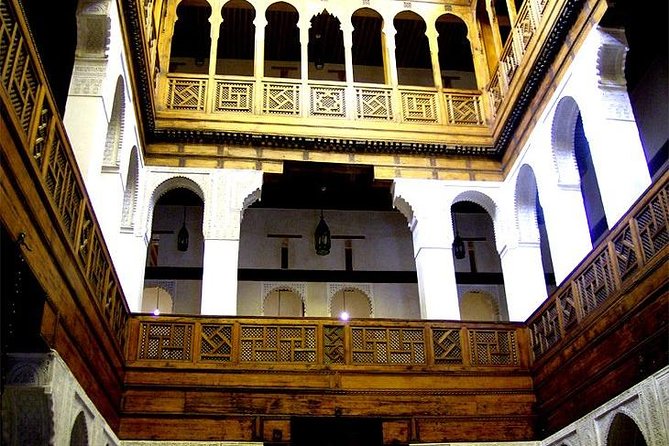 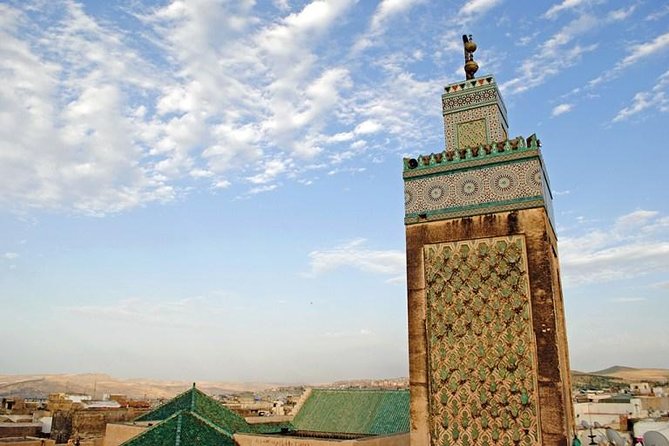 Experience the Old Town of Fez in style and sophistication on a private tour, ideal for travelers seeking a personalized experience.
During this custom tour, you’ll tick off iconic Fez' Medina sights such as The Blue Gate, Tannery, The Souks, Mellah, panoramic view, and many more. Amend your itinerary according to your preferences and stop for as long or as little as you like at iconic Fez Medina landmarks.
Hotel pickup and drop-off are included.
Private custom tour of Fez by car
A personalized expereince designed to orient first-time visitors
Tick off top Fez attractions such as Medersa Bou Inania, Medersa Al Attarine, and Batha Museum and Sunset Strip...
Hotel pickup and drop-off are included

The Medersa Bou Inania was built between 1350 and 1357 by the Merenid sultan Bou Inan. One of the few religious buildings in the city that non-Muslims may enter, the Medersa (madrassa - Islamic school of learning) is a sumptuous architectural gem and one of Morocco's most gorgeous buildings.

Up until the 1960s, this was still a functioning theological school, and the restoration efforts since that time have restored it to its original beauty. The carved woodwork and stucco decoration is magnificent and is a tribute to Morocco's master artisans.

Another example of fine Merenid architecture, the Medersa el-Attarine was built in 1325 by Abu Said. The courtyard here is a wonderful display of the intricate decoration from this period, with elaborate zellige tile work and cedar wood carvings. The upper floor is made up of a warren of cells, which were once home to students studying theology at the Qaraouiyine Mosque (once one of the world's first universities). If you climb up onto the rooftop, you can get great views of the green-tiled roof of the Qaraouiyine Mosque itself.

Fes el Bali is the medina area and the city's oldest neighborhood. It's thought to be the largest intact surviving medina in the world. The main gate into the area is Bab Boujloud. As you approach this grand old gate, you get wonderful views of the neighborhood's famed landmark: the minaret of the Medersa Bou Inania, which sits just after the Bab Boujloud gate.

Within its walls, the rambling streets spiral out into two distinctly different districts, divided by a meandering river. The left bank is home to the most historic monuments and the majority of the shopping souks, while the right bank may be scruffier but is full of local life and photogenic alleyways. The right bank also has some interesting buildings to search out, including the Al-Andalus Mosque, built in 1321 and noted for its prominent green and white minaret, which actually dates back to the 10th century.

Nearby, you'll find a variety of interesting other monuments including an old fondouk (khan or caravanserai) and the crumbling Medersa Sahrij. The entire Old City is a walker's delight, with plenty of opportunities to explore and soak up the atmosphere of Fes life. Be aware that the area is hilly, and the lanes are laid with cobblestones, so wear sturdy shoes.

For shoppers, Fes el Bali is a paradise of local craftwork, with colorful Moroccan slippers, leatherwork, metalwork, rainbow-glass lamps, and tiles all displayed at stalls throughout the district.

The streets just west of the Qaraouiyine Mosque have the greatest concentration of shopping opportunities. This is also where you can visit the famous Chouara tanneries of Fes, one of the top things to do in this area. Here, you can watch the traditional dying of animal skins-the first step in making Morocco's many leather products. Leather shops surrounding the tanneries provide bird's-eye views over the area from their rooftops and are the best place to take photos.

The atmospheric old Mellah (Jewish Quarter) is in Fes el Jedid, just north of the Royal Palace. Throughout this compact district, the lanes are lined with fine (though highly dilapidated) examples of early 20th-century houses, which were once home to the vibrant Jewish community of Fes. The small, restored Aben-Danan Synagogue can also be visited here. On the edge of the Mellah is the rambling Jewish cemetery, one of the city's most tranquil spots, and a Jewish Museum housing a collection of objects highlighting Moroccan Jewish life and culture.

For the best views over Fes el Bali, walk up the steep hill just outside the city ramparts, to the Borj Nord area. Here, you'll find a 16th-century fortress, home to an impressive arms museum. The collection of weapons includes some extremely rare pieces that represent armory from across the world. Amid the cache is the five-meter-long cannon (with a weight of 12 tons) that was used during the Battle of the Three Kings.

After viewing the arms museum, keep heading up the hill to the summit where a scattering of golden-stoned Merenid tombs sits. Although the tombs are in a heavily ruined state today, you're here for the views, which take in the entire walled medina area and out to the green hills beyond.

Built in AD 857 by Tunisian immigrants from the holy city of Kairouan, the Qaraouiyine Mosque was one of the medieval period's most distinguished universities. Today, in its function as a working mosque, it is one of Morocco's largest centers of worship, with a prayer hall that can hold 20,000. The library is one of the oldest surviving in the world and contains more than 30,000 books. Among the collection is a 9th-century Qur'an. The Fes el-Bali complex cannot be entered by non-Muslims, but you can get excellent views of the mosque from nearby restaurant rooftops.

The Merenids built this "New City" in the 13th century, when they realized that Fes el Bali would be too small to contain their palaces. The rather grand Royal Palace takes center stage here (not open to the public) and behind it, mosques and medersas fill the host of lanes. There's a tranquil air to this small section of the city, which sits between bustling Fes el Bali and the European-style Ville Nouvelle, and it makes a welcoming, peaceful lull between these two faster-paced worlds.

The Batha Museum is inside a Hispano-Moorish summer palace built in the late 19th century. The museum collection traipses through a selection of traditional Moroccan craftsmanship, with wood carved doors, wrought-iron work, embroidery, carpets, and jewelry all on display.

The centerpiece exhibit of the museum is the ceramics room, where the famous Fes blue ceramics, colored with cobalt, are featured. More interesting than the displays themselves is the building's own original decoration and the lovely internal courtyard garden, which is full of shady trees and tall palms and is a true oasis within the city.

Right amid Place Nejjarine, surrounded by metalworker workshops, you'll find the Nejjarine Museum in an old fondouk, which has been transformed into a museum displaying Moroccan wooden arts and crafts. Here, in the salons where traders once slept on their trips to town are displays of engraved granary doors, dowry chests, and mashrabiya (lattice screen) window frames. The central courtyard of the fondouk, with its sturdy pillars and balconies decorated in carved wood and stucco detailing, is worthy of the entrance price alone and has been painstakingly restored to its original glory.

Informacion Adicional
"Confirmation will be received at time of booking"
"Not wheelchair accessible"
"Dress code is smart casual"
"May be operated by a multi-lingual guide"
"Stroller accessible"
"Service animals allowed"
"Near public transportation"
"Infants must sit on laps"
"Infant seats available"
"No heart problems or other serious medical conditions"
"Most travelers can participate"
"This is a private tour/activity. Only your group will participate"