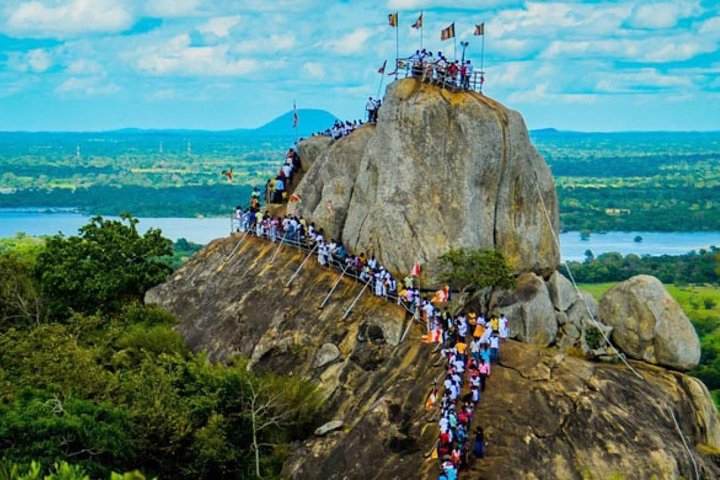 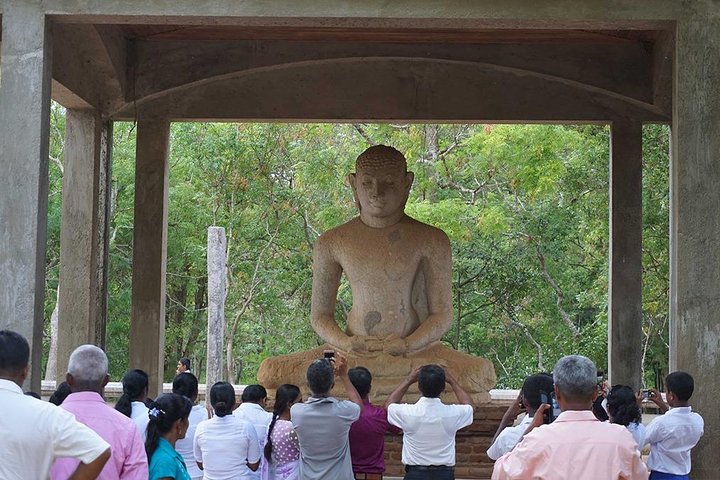 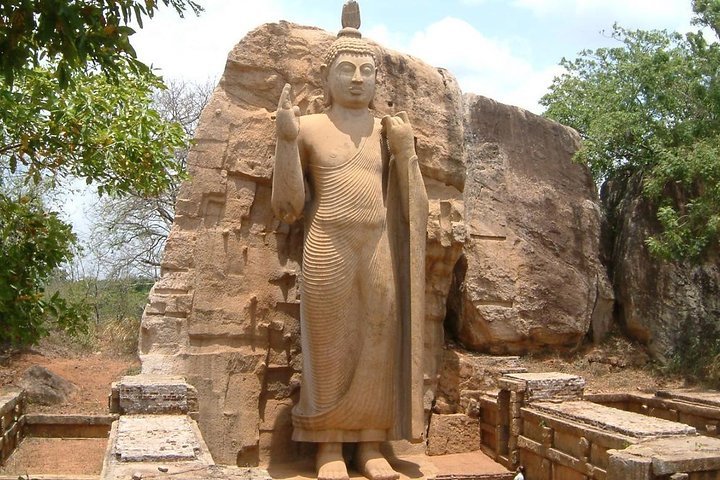 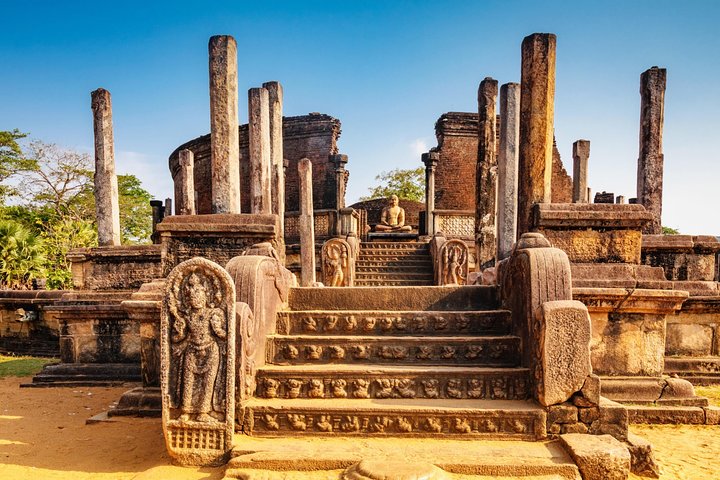 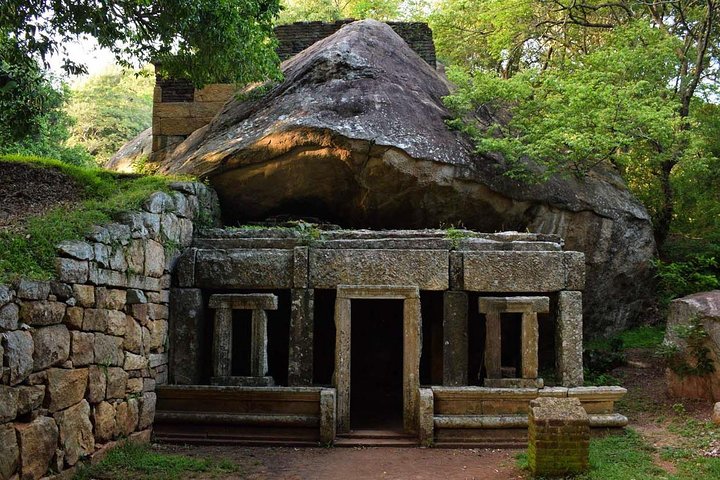 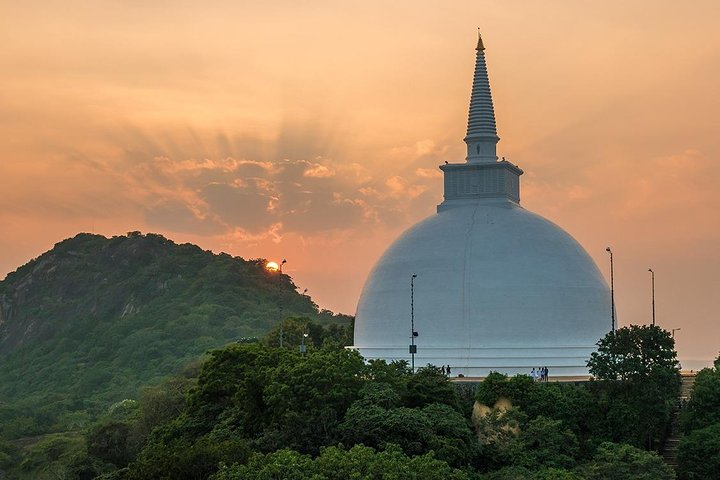 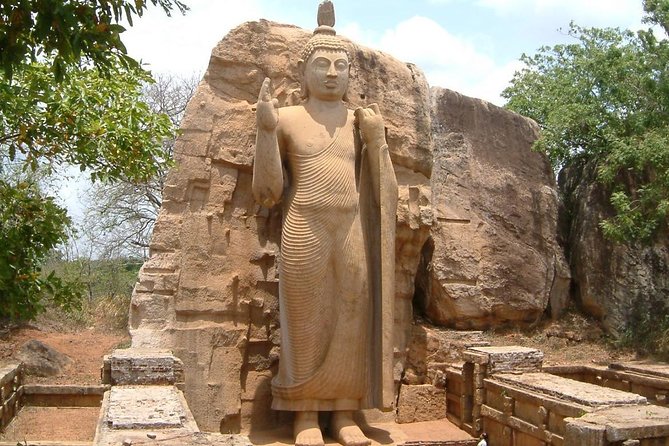 Most of tourists struggling to choose where to visit in Cultural triangle!

In the north-central area of Sri Lanka, dry plains and rocky outcrops are home to the famous Cultural Triangle. This region, the home of ancient Sinhalese royalty is loaded with ancient ruins and restored temples, a must visit when in Sri Lanka. The way in which The Cultural Triangle is experienced will be very different in terms of how much time is spent there.

Why a triangle?
The Cultural Triangle is so called because it includes three major sites that form a triangle. Anuradhapura to the north, Polonaruwa to the east and Kandy to the south-west.

So we have design this tour as a tailor made where you can customize it on your preferences. Basically added top attractions in Anuradhapura, Polonnaruwa and Sigiriya/Dambulla. However you can extend this tour to Kandy on your request.

Stop At: Mihintale, Anuradhapura Sri Lanka
The sleepy ruins of Mihintale are closely associated with the earliest introduction of Buddhism to Sri Lanka. A ceremonial staircase climbs past pools, monastery ruins and rock inscriptions to reach two large dagobas. As the climb takes 25 minutes, you may wish to visit early in the morning or late in the afternoon to avoid the midday heat.
Mihintale is not only a historical site to visit this a place where you can watch birds.
Have good access and average walking/ climbing time. Must visit places are Mihintale Temple, Buddha statue, Cela Chaityaya and Aradhana Gal. Also Kaludiya Pokuna.
Duration: 1 hour

Stop At: Ruwanwelisaya, Abhayawewa Rd, Anuradhapura 50000 Sri Lanka
Sacred to many Buddhists all over the world, the Ruwanwelisaya is a stupa, is also considered a marvel for its architectural value. It was built by King Dutugemunu who was best known for his great victory over the Chola King, Elara. It is one of the world’s tallest monuments, standing at 300 feet (91 m) and with a circumference of 950 ft (290 m).
Duration: 40 minutes

Stop At: Sri Maha Boodhi Temple, Anuradhapura Sri Lanka
The sacred bodhi tree is central to Anuradhapura in both a spiritual and physical sense. It was grown from a cutting brought from Bodhgaya in India and is said to be the oldest historically authenticated tree in the world, tended by an uninterrupted succession of guardians for over 2000 years. Today thousands of devotees come to make offerings, particularly on poya (full moon) days and weekends. Sunset is a magical time to visit.
Duration: 1 hour

Stop At: Abhayagiri Dagaba, Watawandana Rd, Anuradhapura 50000 Sri Lanka
Dating back to the 1st century BC, this colossal dagoba was the ceremonial focus of the 5000-strong Abhayagiri Monastery. Originally over 100m high, it was one of the greatest structures in the ancient world, its scale only matched by the pyramids of Giza (and nearby Jetavanarama). Today, after several reconstructions, Abhayagiri Dagoba soars 75m above the forest floor. Visually, it's stunning, and your first glimpse of this brick monument through a gap in the surrounding forest is breathtaking.
Duration: 1 hour

Day 2: First city of the land in the 11th Century- Polonnaruwa

Stop At: Gal Vihara, 440/225 Palm Grove State Minuwangoda road, Polonnaruwa 51000 Sri Lanka
This magnificent group of statues was built by king Parakramabahu (1153-1186) which was part of the Uthararama Complex.

The first statute you will come across is a seated Buddha in meditation. He is seated on a lotus. The rock behind the statue is decorated with carvings of “vimana”. Four smaller Buddha statues can be seen on these decorations.

Next is a smaller statue of Buddha (about 15 feet high) carved in to the rock. On the sides of the statue are two deities. It is believed this carving represent the Buddhas visit to heaven called “Thusitha” to preach to his mother.

It is said that this statue was painted with pure gold and treasure hunters have burnt logs on the statue and melted the gold.

Third is a standing statue of Buddha. This has been disputed by some and think this is the statue of Ananda thero at the site of lord Buddha’s passing away. This 23 feet tall statue is thought to be done by a later king as the chronicles talk about only two statues in the seating position and one statue on the lying position which was done by King Parakramabahu (1153-1186).

Next and the last is a massive statue of Buddha passing way. This is 80 feet long. The ear lid falling along the body, One foot slightly behind the other (The toes are not positioned equally on the feet) are signs that this is not Lord Buddha resting but at his death.
Duration: 30 minutes

Stop At: Polonnaruwa Vatadage, Sacred City, Polonnaruwa Sri Lanka
The Vatadage, one of the oldest & most beautiful monuments in Polonnaruwa, is to our left as we enter the Dalada Maluwa. In spite of its modest proportions, the circular building with concentric terraces is a superbly planned & executed 12th century masterpiece. It was certainly intended to house the Sacred Tooth Relic of Buddha, which is now deposited at The Sacred Temple of Tooth in Kandy. Built by King Parakrambahu.
Duration: 1 hour

Stop At: Lankathilaka Image House, Polonnaruwa Sri Lanka
The specialty in this structure is the two pylons at the entrance and the giant Buddha statue in side. This statue is 42 feet in height and building walls are 53 feet high.
The structure was done with bricks and there were two floors. You can see the remaining of stares, which ware used to climb the upper floor.
Duration: 40 minutes

Stop At: Minneriya National Park, Maradankadawala-Habarana-Thirukkondaiadimadu Highway, 50150 Sri Lanka
Minneriya national park is one of the best places in the country to see wild elephants, which are often present in huge numbers. Elephants, which can number 200 or more, come to feed and bathe during what is known as ‘the Gathering’; and flocks of birds, such as little cormorants, painted storks, herons and large pelicans all fish in the shallow waters.
Duration: 4 hours

Stop At: Sigiriya The Ancient Rock Fortress, Sigiriya 21120 Sri Lanka
Rising dramatically from the central plains, the enigmatic rocky outcrop of Sigiriya is perhaps Sri Lanka's single most dramatic sight. Near-vertical walls soar to a flat-topped summit that contains the ruins of an ancient civilisation, thought to be once the epicentre of the short-lived kingdom of Kassapa, and there are spellbinding vistas across mist-wrapped forests in the early morning.
Duration: 2 hours

Informacion Adicional
"Confirmation will be received at time of booking"
"Not wheelchair accessible"
"Infant seats available"
"Not recommended for travelers with back problems"
"Most travelers can participate"
"This is a private tour/activity. Only your group will participate"