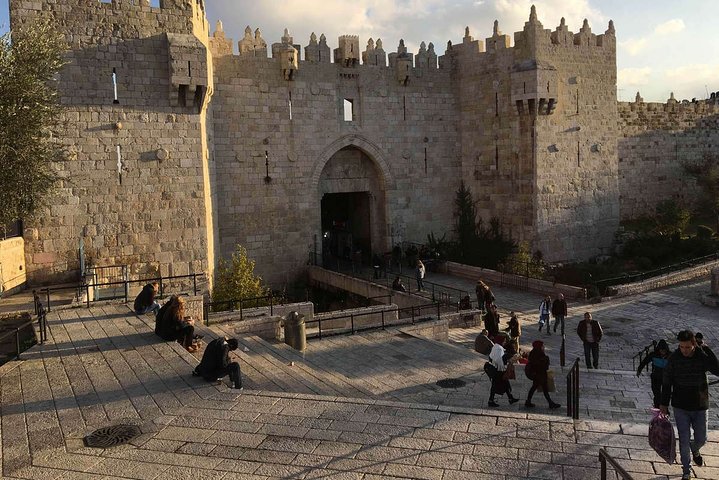 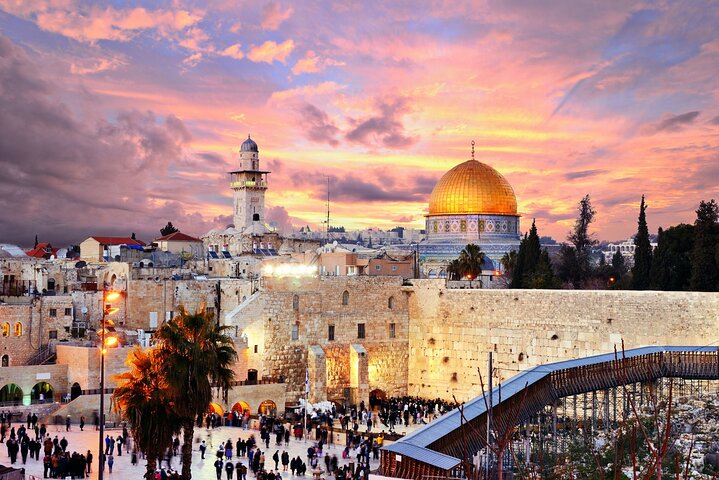 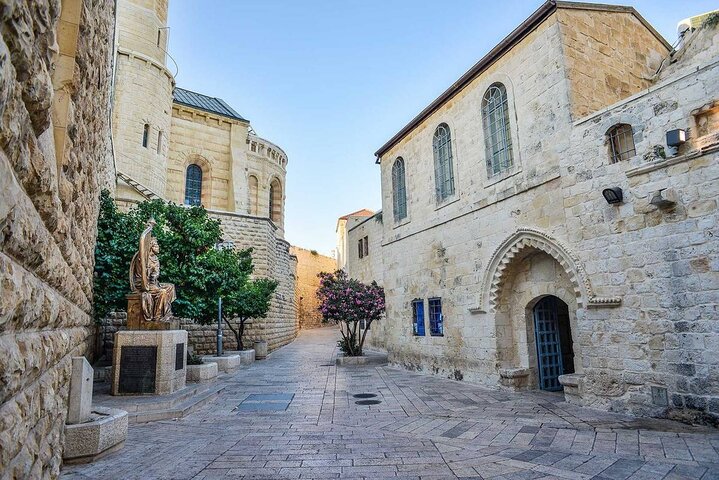 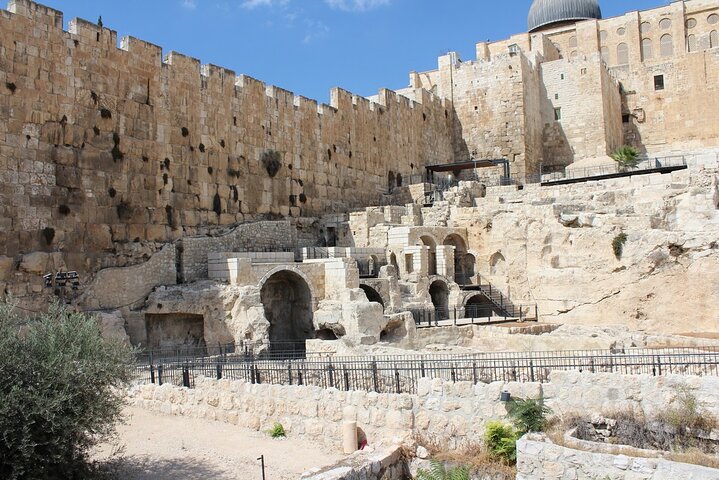 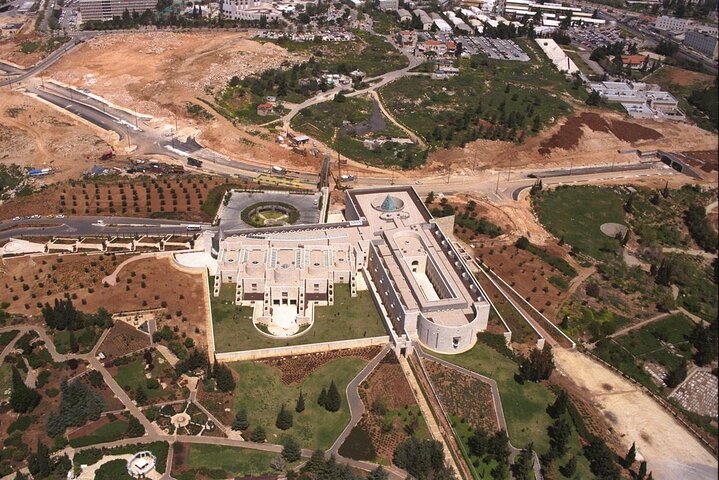 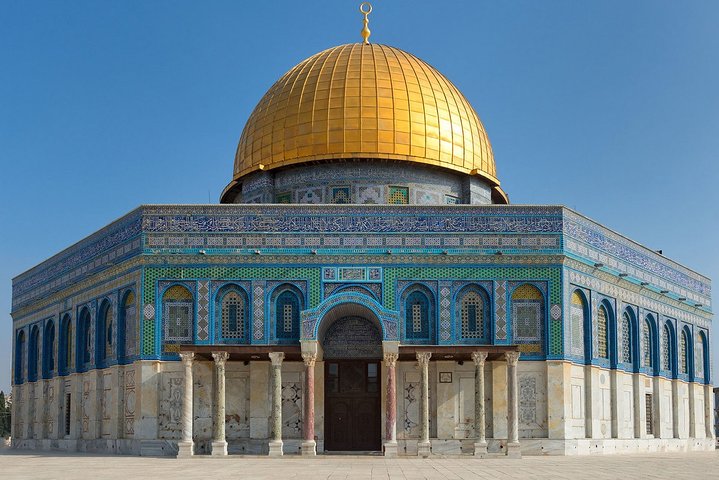 Your guide will pick you up from your hotel or from your cruise ship. The drive from Ashdod to Jerusalem will take about 1.5 hours. The first stop will be at a panoramic viewpoint from the top of Mount of Olives before exploring The Old City of Jerusalem.
Mount of Olives, Arabic Jabal al-Ṭūr, Hebrew Har ha-Zetim, multi-summit limestone ridge just east of the Old City of Jerusalem and separated from it by the Kidron Valley. Frequently mentioned in the Bible and later religious literature, it is holy to Judaism, Christianity, and Islam.

The Broad Wall is located in the Jewish Quarter of the Old City of Jerusalem. It is the remnant of a massive defensive wall originally erected during the First Temple Period (c.960BC-586BC) and excavated in the 1970s by archaeologist Nahman Avigal. The Broad Wall was an important archaeological discovery as up until that point the boundaries of Jerusalem during the Biblical period were unsu

The Church of the Holy Sepulchre is a church in the Christian Quarter of the Old City of Jerusalem. The church contains, according to traditions dating back to at least the fourth century, the two holiest sites in Christianity: the site where Jesus was crucified, at a place known as Calvary or Golgotha, and Jesus's empty tomb, where he was buried and resurrected. The tomb is enclosed by a 19th-century shrine called the Aedicula. The Status Quo, an understanding between religious communities dating to 1757, applies to the site.

The Supreme Court is the highest court in Israel. It has ultimate appellate jurisdiction over all other courts, and in some cases original jurisdiction. The Supreme Court consists of 15 Judges, who are appointed by the President of Israel, upon nomination by the Judicial Selection Committee.

The Christian Quarter is one of the four quarters of the walled Old City of Jerusalem, the other three being the Jewish Quarter, the Muslim Quarter and the Armenian Quarter.

Stop At: Dome of the Rock, Temple Mount, Jerusalem Israel

The Dome of the Rock is an Islamic shrine located on the Temple Mount in the Old City of Jerusalem. It was initially completed in 691–92 CE at the order of Umayyad Caliph Abd al-Malik during the Second Fitna on the site of the Second Jewish Temple, destroyed during the Roman Siege of Jerusalem in 70 CE.

The Jewish Quarter is one of the four traditional quarters of the Old City of Jerusalem (part of Israeli-occupied East Jerusalem). The 116,000 square meter area lies in the southeastern sector of the walled city, and stretches from the Zion Gate in the south, along the Armenian Quarter on the west, up to the Street of the Chain in the north and extends to the Western Wall and the Temple Mount in the east. In the early 20th century, the Jewish population of the quarter reached 19,000.

The Knesset is the unicameral national legislature of Israel. As the legislative branch of the Israeli government, the Knesset passes all laws, elects the President and Prime Minister, approves the cabinet, and supervises the work of the government. In addition, the Knesset elects the State Comptroller.

The Muslim Quarter is one of the four quarters of the ancient, walled Old City of Jerusalem. It covers 31 hectares of the northeastern sector of the Old City.

The Via Dolorosa is a processional route in the Old City of Jerusalem, believed to be the path that Jesus walked on the way to his crucifixion. The winding route from the former Antonia Fortress to the Church of the Holy Sepulchre — a distance of about 600 metres — is a celebrated place of Christian pilgrimage.
You will have lunch in an authentic restaurant before driving back.

Informacion Adicional
"Confirmation will be received at time of booking"
"Not wheelchair accessible"
"Travelers should have a moderate physical fitness level"
"This is a private tour/activity. Only your group will participate"
"Face masks required for travelers in public areas"
"Face masks required for guides in public areas"
"Face masks provided for travelers"
"Hand sanitizer available to travelers and staff"
"Social distancing enforced throughout experience"
"Regularly sanitized high-traffic areas"
"Gear/equipment sanitized between use"
"Transportation vehicles regularly sanitized"
"Guides required to regularly wash hands"
"Regular temperature checks for staff"
"Paid stay-at-home policy for staff with symptoms"
"Contactless payments for gratuities and add-ons"