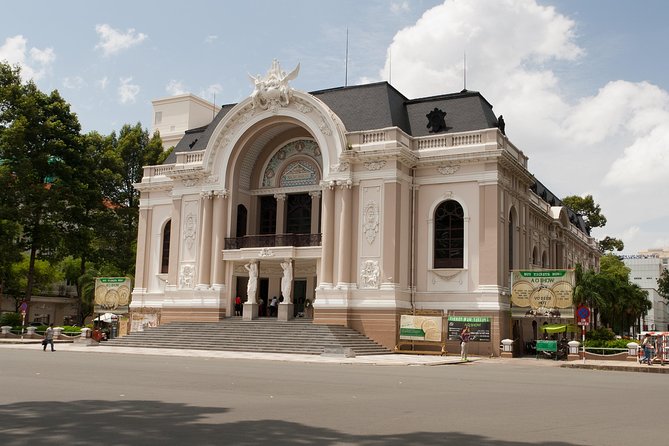 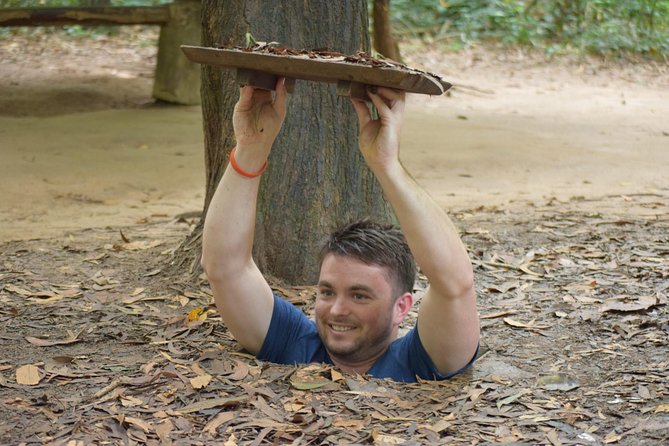 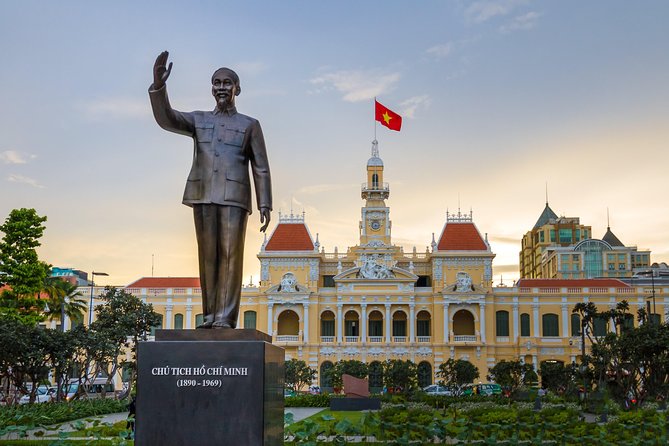 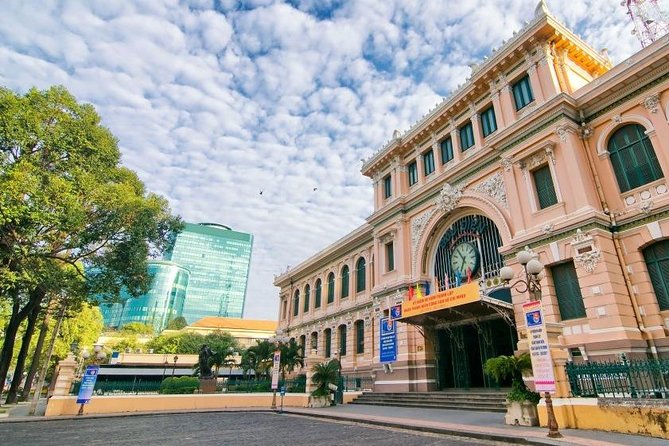 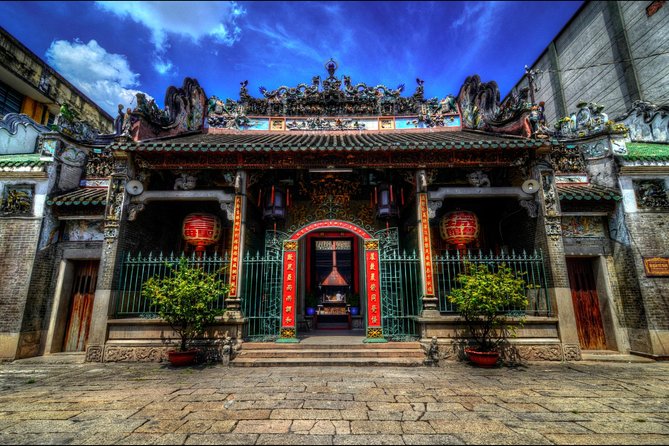 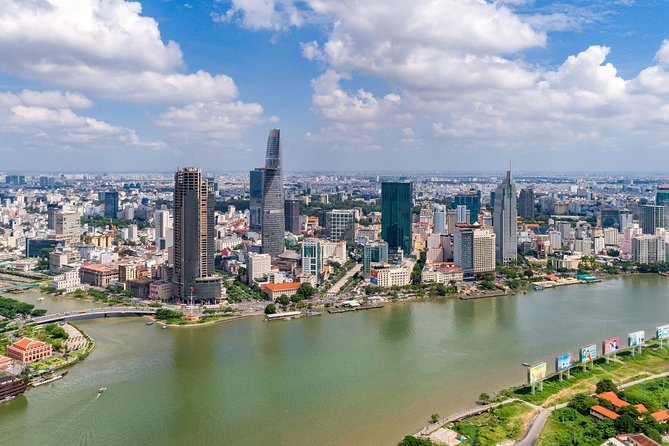 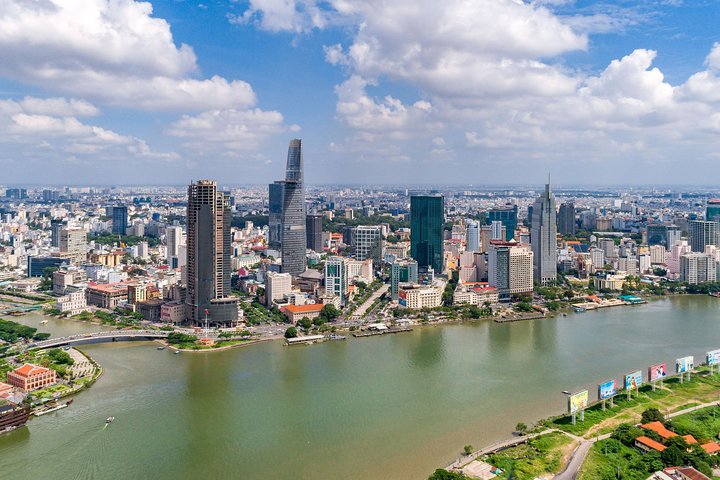 Saigon Notre Dame Cathedral, built in the late 1880s by French colonists, is one of the few remaining strongholds of Catholicism in the largely Buddhist Vietnam. Located in Paris Square, the name Notre Dame was given after the installation of the statue ‘Peaceful Notre Dame’ in 1959. In 1962, the Vatican conferred the Cathedral status as a basilica and gave it the official name of Saigon Notre-Dame Cathedral Basilica. Measuring almost 60 metres in height, the cathedral’s distinctive neo-Romanesque features include the all-red brick façade (which were imported from Marseille), stained glass windows, two bell towers containing six bronze bells that still ring to this day, and a peaceful garden setting in the middle of downtown Ho Chi Minh City District 1.

The Central Post Office in Ho Chi Minh is a beautifully preserved remnant of French colonial times and perhaps the grandest post office in all of Southeast Asia. Located next door to Notre Dame Cathedral, the two cultural sites can be visited together and offers visitors a chance to imagine life in Vietnam during the times of the Indochinese Empire. The building was designed by Alfred Foulhoux and features arched windows and wooden shutters, just as it would have in its heyday in the late 19th Century.

Independence Palace was the base of Vietnamese General Ngo Dinh Diem until his death in 1963. It made its name in global history in 1975. A tank belonging to the North Vietnamese Army crashed through its main gate, ending the Vietnam War. Today, it's a must-visit for tourists in Ho Chi Minh City. The palace is like a time capsule frozen in 1975. You can see two of the original tanks used in the capture of the palace parked in the grounds. Independence Palace was the home and workplace of the French Governor of Cochin-China. It has lush gardens, secret rooms, antique furniture, and a command bunker. It's still in use to host important occasions in Ho Chi Minh, including APEC summits

The War Remnants Museum in Ho Chi Minh City first opened to the public in 1975. Once known as the ‘Museum of American War Crimes’, it's a shocking reminder of the long and brutal Vietnam War. Graphic photographs and American military equipment are on display. There's a helicopter with rocket launchers, a tank, a fighter plane, a single-seater attack aircraft. You can also see a conventional bomb that weighs at 6,800kg. American troops had used these weapons against the Vietnamese between 1945 and 1975.

The People’s Committee Building Saigon in central Ho Chi Minh City features well-preserved French colonial architecture in a spacious garden landscape. Originally constructed as a hotel in 1898 by French architect Gardes, it now serves as a city hall and one of the city’s most iconic landmarks. Occupying the end of Nguyen Hue walking promenade, it has three buildings with embossed statues of animals and people, intricate bas-reliefs on the walls, as well as a statue of Ho Chi Minh in front of the main building. The best time to visit is in the evening, as these features are beautifully illuminated with LED lights.

The Saigon Opera House in Ho Chi Minh is an elegant colonial building at the intersection of Le Loi and Dong Khoi Street in District 1, very close to the famous Notre Dame Cathedral and the classic Central Post Office. The restored three-storey 800-seat Opera House was built in 1897 and is used for staging not only opera but also a wide range of performing arts including ballet, musical concerts, Vietnamese traditional dance and plays. Performances are advertised around the building and information can be found in the state-operated tourist information centre close by.

Ho Chi Minh City’s Cholon is Vietnam’s largest Chinatown with roots dating back to 1778; it’s also a place of great historical and cultural importance. Chinese minorities hid here from the Tay Son and subsequently had to rebuild the area twice following attack with as many as 70% estimated to have died trying to escape on boats. Those who survived settled and began selling a variety of Chinese products. During the Vietnam War Cholon was a thriving black market for US soldiers trading in American Army issue supplies. The area today is a popular site for those on the tourist trail and also attracts many Taiwanese and Chinese visitors. Cholon is an interesting place to see classical Chinese architecture reminiscent of years gone by with plenty of Chinese restaurants. The Binh Tay market at the centre is busy, crowded and messy with small aisles selling all manner of goods. This market sometimes disappoints tourists when compared to other markets in Ho Chi Minh as the products are not that varied, but the main draw to Cholon is not to shop but to enjoy the authentic Chinese atmosphere that has existed here for hundreds of years. It’s a wonderful place to experience at night.

Ba Thien Hau Temple in Saigon is a Buddhist temple dedicated to the Chinese sea goddess, Mazu. It’s believed that she protects and rescues ships and people on the sea by flying around on a mat or cloud. Mazuism is connected with traditions and beliefs from both Taoism and Buddhism. Mazuism is therefore an incorporation of different aspects and traditions which have merged to form a new belief. You will find this temple in ‘Cholon’ (Chinatown) in District 5, which is roughly a twenty minute drive from the city centre.

Ben Thanh Market in Ho Chi Minh City's District 1 is a great place to buy local handicrafts, branded goods, Vietnamese art and other souvenirs. Here, you’ll find eating stalls inside the market where you can get a taste of hawker-style Vietnamese cuisine or simply cool off with a cold drink when the bargaining becomes too much. The market is big, difficult to navigate at times and certainly best avoided during the hottest part of the day but all the same its well worth a look. When night falls, restaurants around the perimeter of the market open their doors creating a vibrant street side scene filling the air with the scents of wok-fried noodles, barbecued fish and meats. One of Saigon’s oldest landmarks, Ben Thanh offers a great atmosphere that is absolutely authentically Vietnamese.

The Cu Chi Tunnels are part of a massive war museum in Ho Chi Minh. They offer visitors a sneak-peek at the underground life of Vietnamese soldiers back in 1948. The site has over 120km of underground tunnels, with trapdoors, living areas, kitchens, storage facilities, armoury, hospitals, and command centres. After the war against the French, Vietnamese soldiers expanded the tunnels and included effective air filtration systems, which helped them survive the Cu Chi carpet-bombings.
It is now one of Ho Chi Minh’s most iconic attractions. You can enjoy plenty of activities during your visit. A popular option is following the narrow routes of the underground tunnel. Before entering the underground tunnels, visitors watch a short film of Chu Chi Tunnels so that they understand how the tunnel system works. Parts of Chu Chi Tunnels are also cemented and widened, so that the crawl is less harrowing than it would have been in the past.

Stop At: My Tho, My Tho, Tien Giang Province, Mekong Delta

The Mekong Delta is a network of distributaries in southwestern Vietnam, between Ho Chi Minh City and Cambodia. The river itself starts in the Himalayas and passes through China, Myanmar, Thailand and Cambodia before reaching Vietnam, which partly explains why the waters are so murky. More than half of Vietnam’s rice and fish comes from the delta region. It’s vital to the Vietnamese economy and diet.
Life in the area revolves around water, from the famous floating markets to the vast agricultural industries. An amazing variety of fruits, flowers and livestock grow in the region. The Mekong River Delta is the rice basket of Vietnam, providing the sustenance for millions.

Informacion Adicional
"Confirmation will be received at time of booking"
"Not wheelchair accessible"
"At time of booking, cruise ship passengers must provide the following information: ship name, docking time, disembarkation time and re-boarding time"
"Most travelers can participate"
"This is a private tour/activity. Only your group will participate"