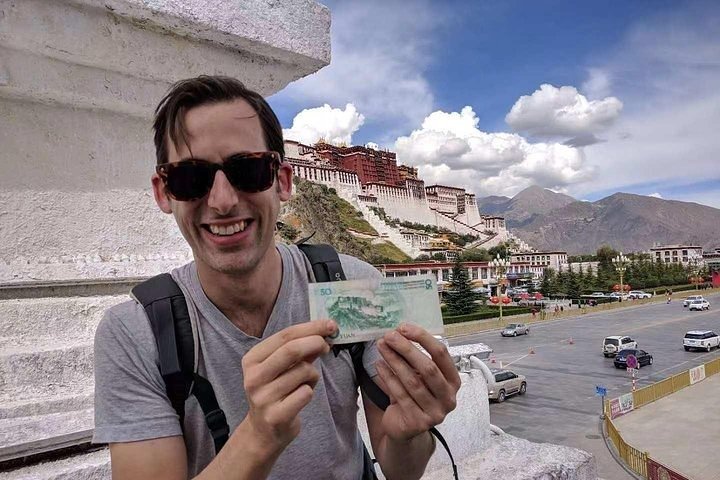 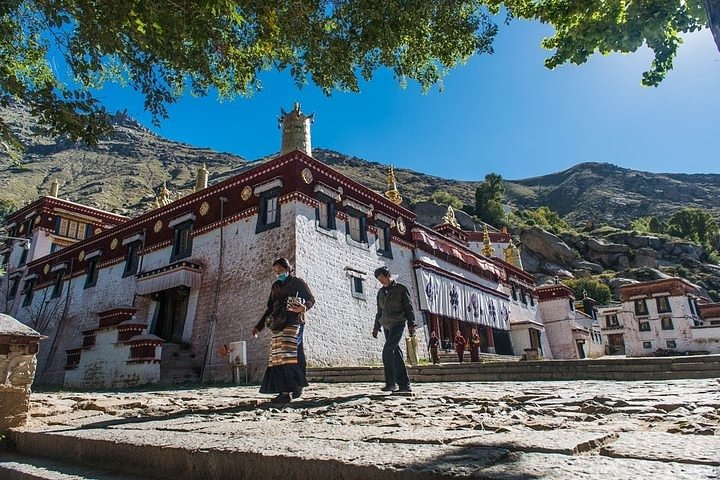 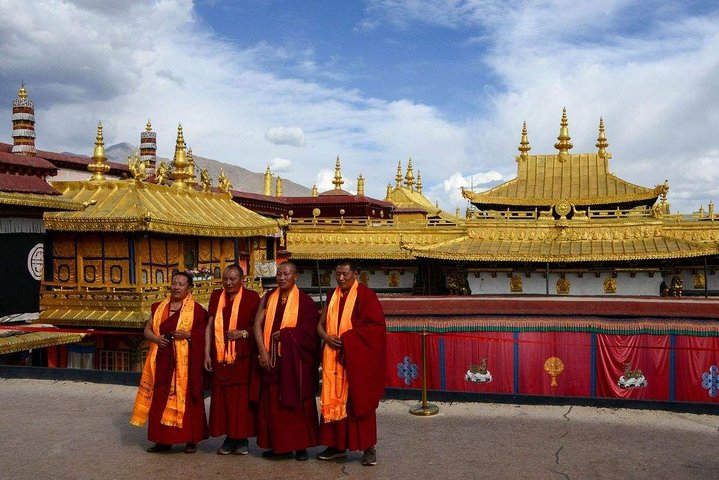 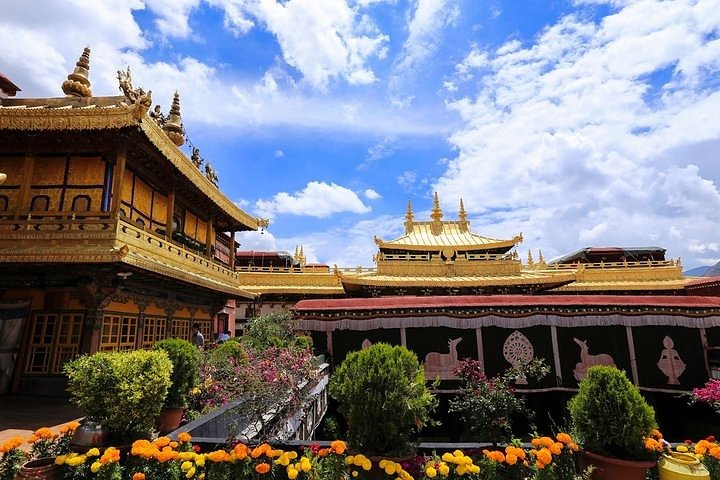 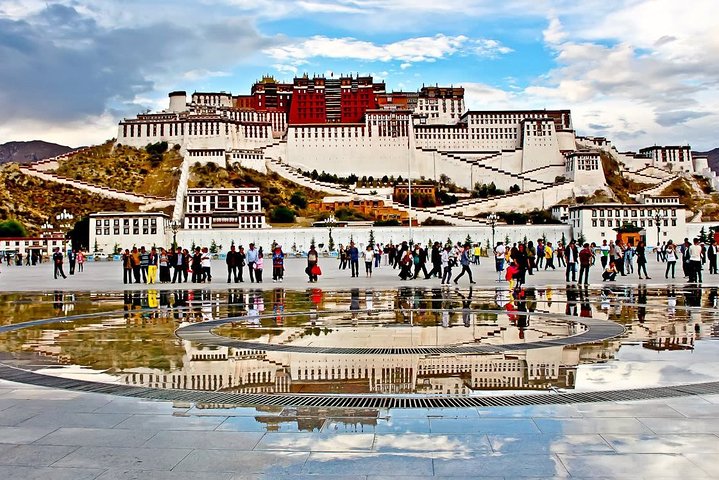 Stop At: Lhasa, Lhasa, Tibet
A local tour guide will welcome you at the airport or train station when you arrive in Lhasa, then you will be transfer to the hotel. Please take a rest and acclimatize the high altitude in the hotel and no need to rush for sightseeing.
Duration: 1 hour

No meals included on this day.
Accommodation included: Overnight in Lhasa, a 3-star hotel

Stop At: Potala Palace, No.35 Gongqian Alley, Beijing Middle Road Cheng Guan District, Lhasa 850000 China
Your tour will begin from UNESCO World Heritage site - Potala Palace. As you approach Potala Palace, marvel at the 13-story fort, which dominates the Lhasa Valley at an altitude of 12,140 feet (3,700 meters). Established in the 7th century during the reign of King Songtsen Gampo, Potala Palace was built as a winter palace of the Dalai Lama. The complex, built on Red Mountain, covers 101 acres (41 hectares) and includes many sutras and painted scrolls -- a treasure of traditional Tibetan culture and Buddhism.

Pass through the massive walled gates and turrets with your guide and visit the private rooms, shrine room and audience hall of the present Dalai Lama on the uppermost level of the White Palace. View the most sacred shrine, the Phakpa Lhakang Temple, as well as the entombed stupas of past Dalai Lamas. Marvel at the Namgyal Monastery assembly hall and its fascinating murals!
Duration: 2 hours

Stop At: Jokhang Temple, Barkhor Street, Chengguan District, Lhasa 850000 China
Designated as part of the same UNESCO World Heritage Site, the Jokhang Temple Monastery is a spiritual center for Buddhists in Tibet. . A renowned pilgrimage destination for Tibetans, the Buddhist religious complex was founded by Queen Bhrikuti in the 7th century. Look with awe at the temple’s rich ornamentation, beautiful murals and harmonious integration with the striking landscape. Your guide will take you to the temple's most important chapels and point out the sacred Jowo Sakyamuni Buddha statue, which represents the Buddha at the age of 12.
Duration: 2 hours

Stop At: Barkhor Street, Chengguan District, Lhasa 851500 China
Next, continue to Barkhor Street, which runs through the heart of the old city and filled with pilgrims and street vendors. Life here has changed little over the centuries. As you walk in a clockwise direction along the circuit, you’ll find stalls selling everything from traditional Tibetan clothes to knives to prayer wheels and thangka, Tibetan scroll painting.

In the evening, enjoy the welcome dinner before retiring to your hotel.
Duration: 1 hour

Stop At: Drepung Monastery (Zhebang Si), Southern Slope of Genpeiwuzi Mountain, Chengguan District, Lhasa 850000 China
In the morning, visit Drepung monastery ---- the home temple of the Dalai Lama and known as one of the “three greet” Gelug monasteries of Tibet and was founded in 1416. Drepung monastery used to be a seat of central government until the 5th Dalai Lama built Potala Palace.
Duration: 2 hours

Stop At: Sera Monastery, Wuze Hill , Sera Chengguan District, Lhasa 850000 China
In the afternoon visit Sera Monastery---It was one of the “three great” Gelug monasteries of Tibet and developed over the centuries as a renowned place of scholarly learning. Admire the imposing complex, built in 1419 by one of the eight disciples of Tsongkhapa, founder of the Gelugpa sect. As you explore the site, your guide will explain the significance of the picturesque green and gold design, typical of Tibetan architecture. Learn about the 1959 revolt that destroyed some of the monastery structures and caused many surviving monks to seek refuge in Mysore, India, where another Sera Monastery was established. The highlight will be monks debate around 3 pm - 5 pm.
Duration: 2 hours

Informacion Adicional
"Confirmation will be received at time of booking, unless booked within 9 days of travel. In this case confirmation will be received within 48 hours, subject to availability"
"Infants must sit on laps"
"No heart problems or other serious medical conditions"
"Not recommended for pregnant travelers"
"Most travelers can participate"
"Stroller accessible"
"Not wheelchair accessible"
"This tour/activity will have a maximum of 15 travelers"
"Gear/equipment sanitized between use"
"Transportation vehicles regularly sanitized"
"Regular temperature checks for staff"

Horário de Início: 10:00 AM
Duração: 4 Days
Ponto de partida: Traveler pickup is offered
Please note free picking up from the airport at 10:00, 13:30 and 17:00, if your flight arrive early please wait at the airport or can pay extra to be pickup upon arrival, free airport drop-off time is 06:30, 08:00 and 12:00 or can pay extra to be drop-off based on your flight time.
Free pickup and drop-off service anytime between train station and hotel.