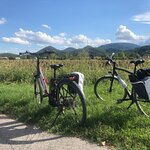 The Euganean Hills are one of the most beautiful hilly areas of northern Italy, a Natural park surrounded by ancient canals.
Collect your bike at our shop at Montegrotto terme and follow the itinerary we have created for you to discover the highlights of the Euganean Hills.
Start your experience with the visit of the Villa dei Vescovi, recently restored and opened to the public.
After your relaxing time in the Villa, reach by bike the Praglia Abbey, the most important Benedictine monastery in the Euganean Hills. In their shop you will find wine, honey and cosmetics.

Start your experience with the visit of the Villa dei Vescovi, residence of the bishops of Padua for centuries, recently restored and opened to the public by the FAI Fondo Ambiente Italiano (similar to National Trust in GB). The Villa is a noble residence inspired by the themes of classicism, which dialogues with the external landscape thanks to the frescoes of its loggias and interiors.

After your relaxing time in the Villa, reach by bike the Praglia Abbey, the most important Benedictine monastery in the Euganean Hills. Here the monks pray, work and restore ancient books. In their shop you will find wine, honey and cosmetics.

The Eugenean hills are the largest elevation on the Padana plain, with its peak of 601 m.The Regional Park of the Euganean Hills extends over an area of 18700 hectares, comprising 15 comunes spread out over the hills and thermal spas of the territory. The whole territory's history goes back to the Palaeolithic epoch. Epicentre of the Paleovenetian civilisation, it witnessed the Roman epoch, Medieval and Renaissance. With over 200 well-indicated footpaths and cycle trails it is easy to discover this world where man and nature have co-existed harmoniously since time immemorial. An excursion in the park encompasses not only the majestic natural beauty but also passes archaeological sites, medieval castles, fortresses, abbeys and churches, moving on in time to aristocratic villas, and antique farmhouses.

Padua is one of the most charming and dynamic towns in Italy. The historical centre boasts a wealth of medieval, renaissance and modern architecture; here a fascinating mix of historic and new, of centuries-old traditions and metropolitan rhythms creates a unique atmosphere. The medieval palaces, churches and cobbled streets emanate a sense of history and culture, the shops, markets and locals, a sparkling vitality and vibrant modern life. Welcome to Padua, a town of vast cultural and artistic heritage!

Surrounded by the relaxing greenery of the Euganean Hills, the Euganean Spas (Terme Euganee), with the two main centres of Abano and Montegrotto and the smaller ones of Galzignano, Battaglia and Monteortone di Teolo are famous for the mud and spa treatments. At the Euganean Spas beneficial water springing here spontaneously since the most remote times, give life to the most famous spa capital in Europe. The healing virtue of this water is the basic component of all the most modern therapeutic and beauty treatments performed in the 110 thermal hotels, where each guest is followed in a very professional and friendly way. The meteoric waters, loaded with geothermal energy, spring forth ata a constant temperature of 87°C and are unique in the world. All establishments in the Euganean Spa region hold I Super classification from the Italian Ministry of Health, indicating that they safeguard the natural resources of the area and apply strict discipline in using the waters.

Abano Terme is one of the most famous spa towns in Europe. Thanks to its enormous potential accommodation, which is based on a significant number of hotels equipped with all department for spa treatments, can claim the distinction of the largest spa town in the world. The city center is characterized by a wide pedestrian area overlooked by ancient and modern buildings, large hotels with their manicured gardens, shops and bars, and between the various historical and monumental evience also contains one of the most important examples of the Aponus' baths, the Montirone Hill.

Along with Abano, Montegrotto Terme constitutes the main center of the Terme Euganee.
According to archeological sources, the ancient lakeside sanctuary, frequented by Venetian people between the late eighth and third centuries BC, stood right here, in the area between Monte Castello and Colle Montagnone. It was a lake of about 2 square kilometers and a roundish shape, originated from a pool of thermal water. The sulfur fumes, considered divine, flowed naturally and powerful from the heart of the earth and they were venerated with votive offerings, mostly vases, bowls, cups and glasses.

The romantic city of Venice is located in the Veneto region of Italy — one of the northernmost states. This ancient and historically important city was originally built on 100 small islands in the Adriatic Sea. Instead or roads, Venice relies on a series of waterways and canals. One of the most famous areas of the city is the world-renowned Grand Canal thoroughfare, which was a major centre of the Renaissance. Another unmistakable area is the central square in Venice, called the Piazza San Marco. This is where you’ll find a range of Byzantine mosaics, the Campanile bell and, of course, the stunning St. Mark’s Basilica.

Informacion Adicional
"Confirmation will be received at time of booking"
"Not wheelchair accessible"
"Near public transportation"
"Most travelers can participate"
"This experience requires good weather. If it’s canceled due to poor weather, you’ll be offered a different date or a full refund"
"This experience requires a minimum number of travelers. If it’s canceled because the minimum isn’t met, you’ll be offered a different date/experience or a full refund"
"This is a private tour/activity. Only your group will participate"