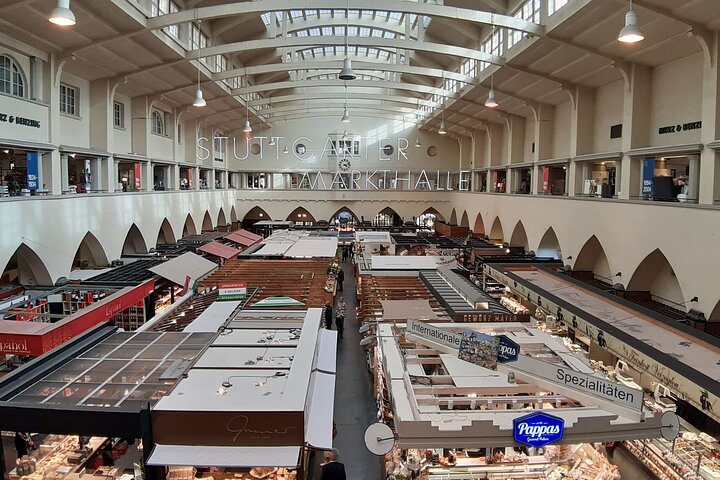 In the heartlands of Swabia, just north of the Black Forest, and spread across hills you'll find the magnificent city of Stuttgart, the capital of Baden-Württemberg, and home to world-famous car brands such as Mercedez-Benz and Porsche. It was here that Gottlieb Daimler played a crucial part in the development of automobiles and even invented the world's first motorcycle, earning the city its nickname as the "Cradle of the Automobile".
But, as the city's tourism slogan says, “Stuttgart offers more!" So join us and discover the charm of this 10th century city to see all the main highlights and explore its rich history.

Stop At: Office building of the railway, Bahnhofstraße 20, 74072 Heilbronn, Germany

We begin our tour at the Main Railway Station, a large complex built in the 1920’s complete with a 12 story tower topped with the Mercedes-Benz logo that is clearly visible from afar.

Leaving the train station we will enter the Königsstrasse (King's Street), a pedestrian shopping zone flanked by beautiful palace grounds, first of which is the Palace Square, the largest square in the inner city containing the royal gardens, that have been renovated in 1977 for the State Garden Exhibit and again in 2006 for the World Cup Finals. Adorned by sculptures, fountains and even a lake adjacent to the New Palace dating back to the late 18th century this is a popular place for recreation, sports, open air concerts and even Christmas markets.

Opposite of the palace stands the Königsbau, a city palace commissioned by Kaiser Wilhelm I, that has since then been cleverly converted into a shopping mall. Just across from the Königsbau you will notice Stuttgart's Art Museum, a spectacular glass cubicle containing many fine examples of German modern art, and in the evening offers a spectacular light show.

From here we will enter Schiller Square, a square centered by a statue of Friedrich Schiller, the world famous writer hailed as Shakespeare’s german counterpart. The statue itself is one of the most recent additions to this square however, because the very origins of the city can be traced back to this place nearly a 1000 years ago. It was here that the first stone buildings were erected, most notable being the old castle, an old fortification that used to be surrounded by water filled moat.

Also noteworthy are the Collegiate Church, the Fruchtkasten, a gothic style stone building, and the Ministry of Justice. Most of the buildings here received a significant makeover during the renaissance age and again after World War 2. Today the square is used as a marketplace and as a Christmas market.

Our next stop is the City Market Hall that has nice murals decorating the facade. Just a few minutes from here is Karls Square a square featuring a statue of Kaiser Wilhelm I, the first German Emperor and Head of the State of a united modern Germany on horseback. Behind the statue are two obelisks that stand as a monument of the Franco-Prussian war which not only marks German victory over France but marks the start as Germany as a united and modern nation in the mid-19th century.

Informacion Adicional
"Confirmation will be received at time of booking"
"Wheelchair accessible"
"This walk tour suitable for any age"
"For this walk tour no transportation needed"
"Activity Level: Easy"
"Near public transportation"
"Most travelers can participate"
"This is a private tour/activity. Only your group will participate"
"Face masks required for travelers in public areas"
"Face masks required for guides in public areas"
"Social distancing enforced throughout experience"
"Guides required to regularly wash hands"