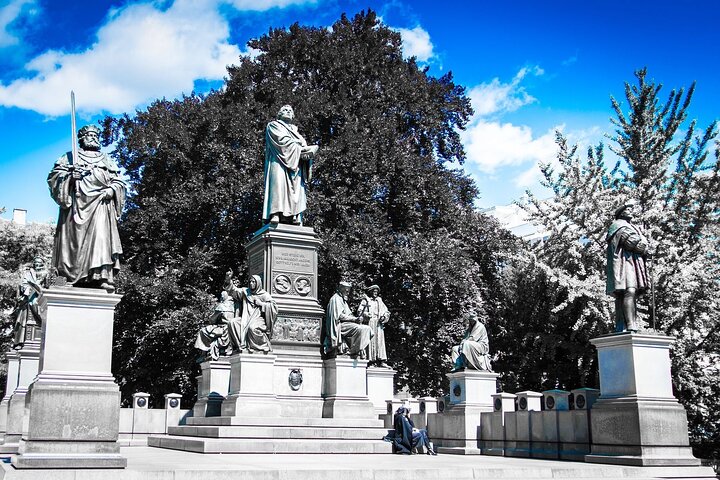 Private Walking Tour of Worms With A Professional Guide

Meeting point: at Siegfriedsbrunnen or Meeting Point at hotel possible if central, without extra charge

You will learn about:
• The history of the city
• The myths and legends of Nibelung
• Diet of Worms, an imperial court that banished Martin Luther
• Important center of Jewish theology in the Middle Ages
• Rabi Rashi
• Europe’s oldest Jewish cemetery with tomb stones
• Wine producing city
• Architectural style Nibelung

Meet your guide at Siegfriedsbrunnen, the fountain named after the hero of the Nibelung Saga, Germany’s most important heroic epic and listen to the legend of prince Siegfried. Discover the Cathedral of Saint Peter, a Romanesque cross basilica with four round towers, two large domes and a choir at each end. Step inside and marvel at the Baroque high altar made of gilded wood and marble. Stroll through Heylshof Garden, site of the Diet of Worms, an imperial court that banished Martin Luther into exile in 1521. Discover the „Lutherdenkmal“, the largest Reformation monument in the world with nine statues and eight portrait medallions of the most important figures in Reformation. In the pedestrian zone of Worms take a look at Winzerbrunnen, the fountain of the winemakers. Since Roman times, Worms is a wine-producing city benefiting from the fertile soil of the Rhine valley and the blessings of a mild climate. During the Middle Ages the city of Worms, known in medieval Hebrew by the name of Warmaisa, was an important center of Jewish theology and learning. Between Martins- and Judenpforte stretches the well preserved and restored former Jewish Quarter with its narrow lanes and picturesque houses. View Rashi Synagogue named after the famous Rabbi Rashi who received his religious education in Worms in the 11th century. Germany’s oldest synagogue was built in 1175. After its desecration on Kristallnacht (Night of Broken Glass) in 1938, it was carefully reconstructed after World War II. From the end of the 19th until the beginning of the 20th century, several buildings in Worms were erected in the so called „Nibelungenstil“, an architectural mixture of new-romanesque style and art nouveau. The most famous examples are the water tower, the main station and the Nibelungen Tower on Nibelungen Bridge down by the river Rhine.