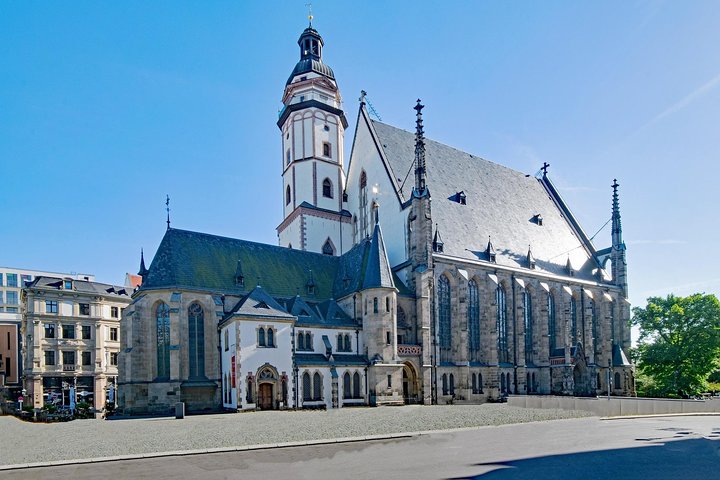 In this tour, you will be discovering:
- The tallest city hall tower in Germany.
- Second memorial for the cathedral choirmaster.
- One of the major churches of central Leipzig.
- The world's oldest universities and the second-oldest university in Germany.
- The concert hall.

Firstly you will be visiting the Leipzig New Town Hall, which is the seat of the Leipzig city administration since 1905. The main tower is, at 114.8 meters, the tallest city hall tower in Germany.

Secondly you will be visiting the St. Thomas Church, which is a Lutheran church. It is associated with a number of well-known composers such as Richard Wagner and Felix Mendelssohn Bartholdy. Today, the church also holds their remains. Martin Luther preached here in 1539.

As early as 1885, on the occasion of Bach's 200th birthday, a second memorial for the cathedral choirmaster was considered. However, it was not until 1894, after the reconstruction of St. John's Church , the rediscovery and overbuilding of Bach's grave and the identification of his skull by Carl Seffner in collaboration with the anatomist Wilhelm His (1831-1904), that the projects became more concrete.

Next you will be visit the St. Nicholas Church, which is one of the major churches of central Leipzig. It’s Construction started in Romanesque style in 1165, but in the 16th century, the church was turned into a Gothic hall church. Baroque elements like the tower were added in the 18th century.

Last but not the least, you will visit, Gewandhaus which is a concert hall, noted for its fine acoustics.