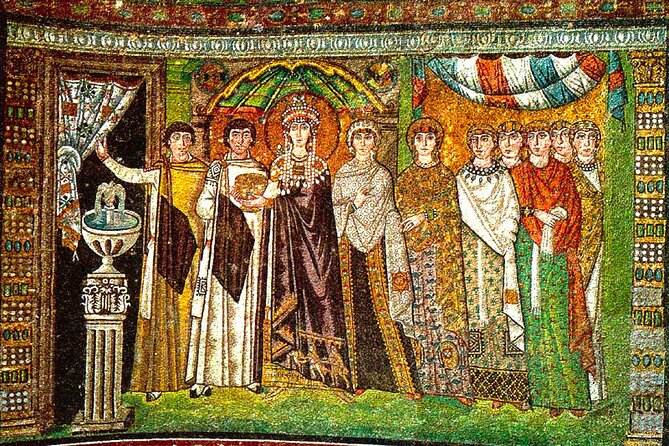 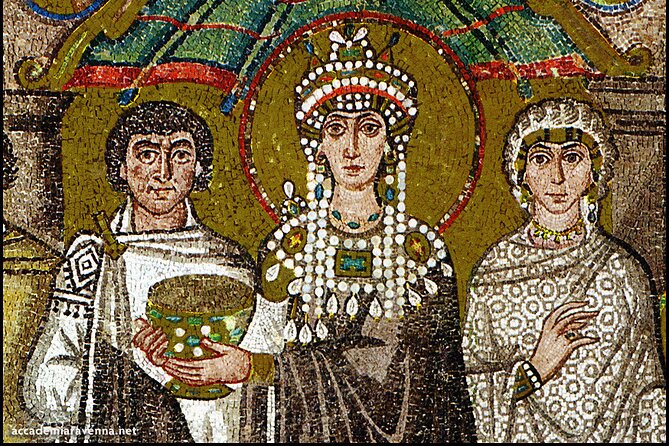 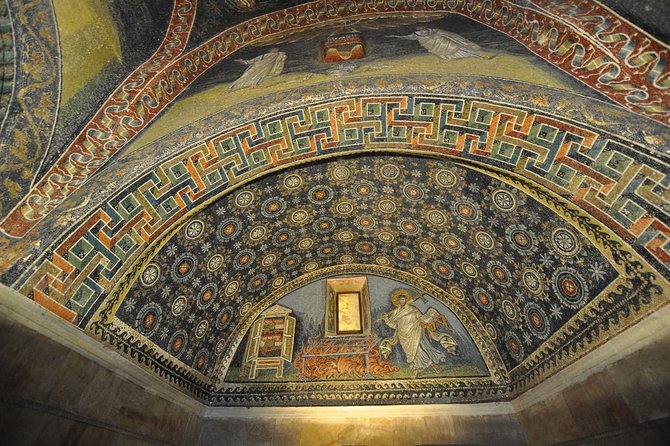 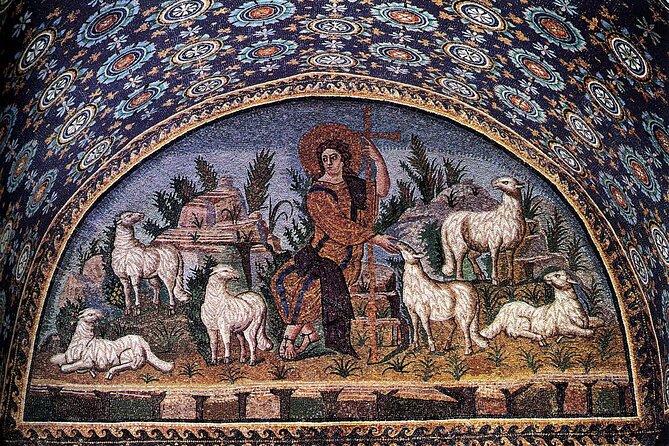 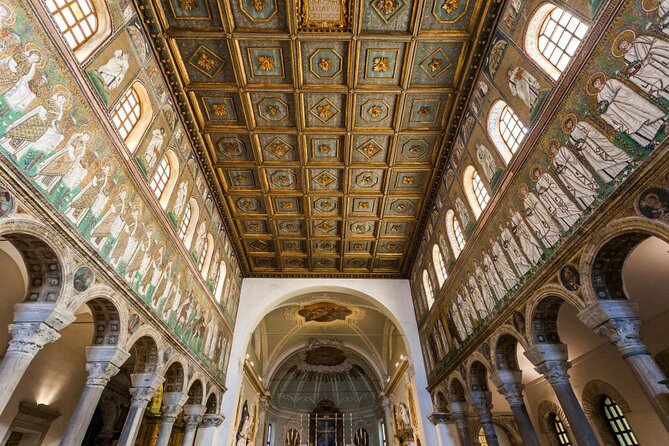 See the best of Ravenna in a full-day guided walking tour led by a friendly professional local guide. Ravenna is like no other place in Italy, its Early Christian and Byzantine mosaics are a wonder of the world and their magnificence will leave you breathless. Ravenna is the right place if you wish to experience amazing historical heritage sites.

The Basilica, built by Theoderic (493-526) next to his palace, was originally used as a Palatine Church of Arian religion. After the Byzantine reconquest and consecration to the orthodox faith (mid-6th century), the Basilica was dedicated to St. Martin, bishop of Tours. On the right side of the façade rises a cylindrical bell-tower dating back to the 9th century.
The 26 Christological scenes from the period of Theoderic are one of the biggest monumental cycles and, at the same time, the most ancient original mosaic work on the New Testament of all times.

Originally dedicated to the Apostles and later to Saint Peter, the construction of the Basilica of San Francesco goes back to the mid-5th century AD. However, very little remains of the early Christian church, because of the frequent reconstructions that have modified the original shape of the building.
In the Middle Ages it was the favourite church of Polentani family, who ruled the city of Ravenna and was the host of Dante Alighieri. It was in this church where his funeral was celebrated in 1321.
The original floor level is now situated 3.6m below the street level.
A 10th-century crypt is still visible through a window situated under the altar. The crypt floor is now permanently underwater and yet it is still possible to catch glimpse of the mosaic fragments that used to decorate the floor of the original church.

Built between 1780 and 1782, Dante's Tomb was commissioned by the cardinal Luigi Valenti Gonzaga. The cardinal's aim was to restore the nobility and decency of Dante's burial after being kept hidden by the Franciscan friars for a long time, in order to protect them from the Florentines who had claimed them.
Next to Dante's mausoleum is the courtyard with the so-called Quadrarco di Braccioforte, an ancient oratory that takes its name from the legend of two people who invoked the "Braccio forte" (strong arm) of the Saviour, whose image was painted in the oratory. Two sarcophagi dating back to the 5th century are preserved in the Quadrarco. At the centre of the garden, a green hump reminds us of the place where Dante's remains were preserved during the II World War.

The present appearance of the Cathedral of Ravenna is relatively recent. It was completely re-built between 1734 and 1735 on the site where Bishop Urso had erected the former cathedral of the city (Basilica Ursiana) at the end of the 4th century. The original floor is now over 3 metres below ground level.
The round bell tower, located next to the cathedral, goes back to the 10th century.
Remains of the original construction are preserved in the Archiepiscopal Museum, that hosts early-Christian works such as the marble ambo dating back to the episcopacy of Agnello (557 - 570) and decorated with 36 panels showing animal figures.

The Chapel of Sant'Andrea or Archiepiscopal Chapel is the only existing archiepiscopal chapel of the early Christian era that has been preserved intact to the present day. It was erected in the years 494-519 during the reign of Theodoric as a private oratory for Catholic bishops when Arianism was the main religion of the court. The chapel is preceded by a small vestibule, entirely covered with marble and mosaics. The iconography of the mosaic decoration aims at glorifying the figure of Christ from a clearly anti-Arian point of view underlining the concept of the glorification of Jesus and reaffirming the principles of Catholic orthodoxy.

The Neonian Baptistery is one of the most ancient monuments of the city built at the beginning of the 5th century like the nearby cathedral. Between 450 - 475 the baptistery underwent restoration works that ended with the reconstruction of the cupola and the realization of the interior decoration, still present today.
Its decoration is divided into three tiers, the lower one covered with marble pieces, the middle one with stucco-works, while the upper section is adorned with mosaics of Hellenic-Roman influence. At the centre of the dome, a big medallion frames the Baptism of Christ. This is one of the oldest mosaic scenes of the Baptism of Christ housed inside a monumental building.

Galla Placidia, sister of the Roman Emperor Honorius who had transferred the Capital of the Western Roman Empire from Milan to Ravenna in 402 AD, built this little chapel around 425-450.
The chapel was once connected to the Church of Santa Croce, erected by Galla Placidia in the second quarter of the V Century.
The upper part of the building – including the walls of the vault, the lunettes, and the cupola - is entirely decorated with mosaics. The themes represented in the mosaic decoration show traces of the influence of both Hellenic-Roman and Christian tradition perspectives. The atmosphere of the chapel is undoubtedly magical. The countless stars of the cupola have deeply stirred the imagination of many visitors of Ravenna.

The Basilica of San Vitale, consacreted in 548, is one of the most important monuments of Early Christian art in Italy. The influence of oriental art plays a dominant role both for the architecture of the basilica and for its mosaic decoration. On entering the Basilica of San Vitale, the eyes are captured by the elevation and width of spaces and by the stunning mosaic decorations of the apse. A labyrinth is represented on the floor, right in front of the altar. Small arrows start at the centre of the labyrinth and lead towards the centre of the basilica, going through a winding path. In the early years of Christianity, mazes were often the symbol of sin and of a possible purification. Finding the way out of the maze thus represented an act of rebirth.

Piazza del Popolo was built by the Venetians in the years 1470 – 1480 after widening a small area along the bank of canal Padenna, that once flew under the present crenellated palace looking over the square. Following the example of Piazza Saint Mark in Venice, in 1483 two columns were erected on the square in order to delimit its borders from the canal Padenna. The lion of Saint Mark was placed on top of the column next to the palace, while on the other stood the statue of Saint Apollinaris, patron saint of the city.
In 1509, when Pope Julius II defeated the Venetians and conquered the city, all emblems of the Serenissima disappeared. The lion of San Marco was replaced by the statue of Apollinaris, while a statue of Saint Vitalis was placed on the second column.
It owes its present name, Piazza del Popolo, to the constitutional referendum of 1946, when more than 88% of Ravenna voters (the highest percentage in Italy) chose republic over monarchy.

At the end of the 5th Century, when Arianism had become the official religion of the Court, the Arian Baptistery was built next to the former Arian cathedral. Nothing remains of the various decorations which covered the walls. The cupola, instead, is adorned with mosaics depicting the baptism of Christ. The mosaics of the Arian Baptistery are an evidence of the Arian religious beliefs, based on Christ as both an earthly and divine figure. While in the Orthodox Baptistery the 12 apostles hail the image of Christ on the central medallion as God’s son, in the Arian Baptistery they pay homage to a big throne topped by a cross, from the arms of which hangs a purple cloth, symbol of Jesus’ corporeity and human suffering.

The Church of San Giovanni Evangelista was built in the 5th century by Empress Galla Placidia, who wished to release herself from a vow made during a sea storm.
In the Middle Ages, a square portico rose before the entrance, now replaced by a wall delimiting a green area accessible through a beautiful 14th-century gothic gate. The bell tower dates back to the 10th century.
In 1944 the church was severely damaged by an air attack that caused both the destruction of 12th-14th century frescos and of the apse mosaics. Fragments of the gorgeous floor mosaics of the basilica (1213), depicting scenes inspired by romances of the time, fantastic animals, and protagonists of the Fourth Crusade are now on display inside the building.

Informacion Adicional
"Confirmation will be received at time of booking"
"FOR CRUISE GUESTS: ask at your cruise help desk if shuttle bus service from Porto Corsini pier to Ravenna city centre is available and if this service is offered by your cruise line. In case this service is not available a one-way taxi ride costs around € 30,00"
"Monuments foreseen in this tour are scattered in the old city centre, in order to reach them we have to walk a bit"
"Wheelchair accessible"
"Stroller accessible"
"Near public transportation"
"Transportation is wheelchair accessible"
"Surfaces are wheelchair accessible"
"Most travelers can participate"
"This is a private tour/activity. Only your group will participate"
"Face masks required for travelers in public areas"
"Face masks required for guides in public areas"