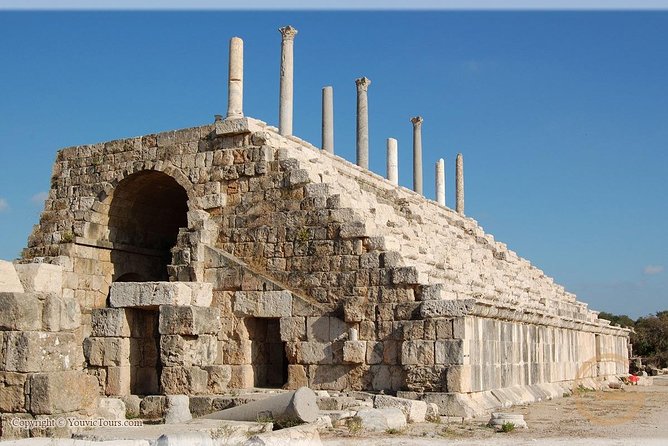 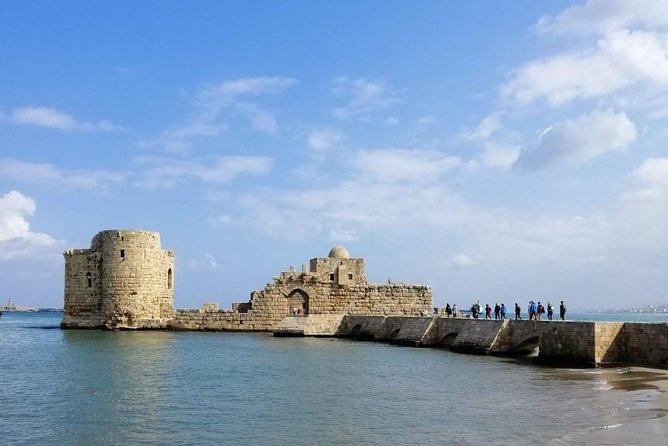 Explore in a full day with the best saving price for this tour ticket, the archaeological site of Sidon, Maghdoucheh & Tyre you will avoid the rush & eliminates the awkwardness of sharing a Big tour bus which give you more time to sight see. Moreover, you are free to create a customized itinerary keeping in mind the tour schedule. You will explore the highlights like the Crusaders sea castle, Sidon old souk, Soap Museum, the great Al-Omari Mosque, Our Lady of Awaiting, Cave, Roman Hippodrome and more.

From your hotel in Beirut, with smile you are picked up in the morning at 8:15 am for a day tour.

Travelers will explore the ancient Phoenician city of Sidon which it has been of great religious, political and commercial value to the region, it is said to be inhabited since 4000 B.C.
Our first visit in Sidon will be to the Crusaders Sea Castle.

After that and Between the Sea Castle and the Land Castle ("St. Louis" Castle), there stretch old Souks (markets) that have maintained their beautiful buildings and commercial role. Nearby, a repair process is observed as well as small crafts shops. In the old Souk, there are vaulted alleys that are 14 kilometers long and not far from the Sea Castle is the picturesque vaulted souk of Sidon, where workmen still ply their trades.
On the edge of the souk is a traditional coffee house where male clientele meet to smoke the narguileh (water pipe) and drink Turkish coffee. Fishermen sell their latest catch at the market near the port not far from the souk's entrance.
As you enter el-Shakiriyya market, there is Debbaneh Palace, where a roofed narrow stairway leads to the internal yard of this old building built in 1721. The building has maintained its Ottoman Arab architectural features.

Then the traveler will enter to a museum to traces the history of soap making in the region, its development and manufacturing techniques, we will see a demonstration of how traditional olive oil soaps are made and learn about the history of the "hammam" (bath) traditions.
A historical section of the museum introduces artifacts which were found during onsite excavation and which include remains of clay pipe heads dating from the 17th to 19th century as well as pottery fragments.
The Museum building is an old soap factory built in the 17th century, although containing parts thought to date back to the 13th century.

The Great Mosque, formerly the Church of St. John of the Hospitalers. The four walls of this rectangular building (recently restored to their natural beauty) date to the 13th century.
Originally a fortress-like Crusader compound with its own chapel, it is still an imposing structure, especially viewed from the seaside.

The Khan El Franj is one of the many khans built by Fakhredine II for merchants and goods. This is a typical khan with a large rectangular courtyard and a central fountain surrounded by covered galleries.
The center of economic activity for the city in the 19th century, the khan also housed the French consulate.


Stop At: Our Lady of Mantara, Maghdoucheh Lebanon

After khan al Franj, we will head to the village of Maghdoucheh, the travelers will visit our Lady of Awaiting which is a Melkite Greek Catholic Marian shrine and a cave and which was discovered on 1721, The travelers will walk through the shrine which is consists of a tower crowned with the statue of the Virgin and Child, a cathedral, a cemetery and a sacred cave believed to be the one where the Virgin Mary rested while she waited for Jesus.

Then we will head to Tyre which was founded around 2750 BC according to Herodotus and the birthplace of Europa & the founder of Carthage ‘’Dido’’, the travelers will see its old north harbor, colorful streets and the beach from two sides of the city.

Then we will head to the Unesco World Heritage Site in the city of Tyre dating back to the II century C.E. It is considered to be one of the largest and best preserved Roman hippodromes of its type in the roman world, travelers will walk thru, which is around 480 meter long and 90 meter wide horseshoe shaped structure seated twenty thousand spectators who gathered to watch the death-defying sport of chariot racing.

Drop off to your hotel

• Traditional Food - Free to choose between a Traditional street food
(Falafel, Shawarma, variety of sandwich..) or a la cart restaurant at the sea side.