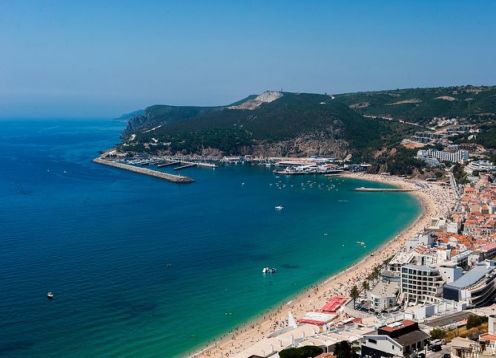 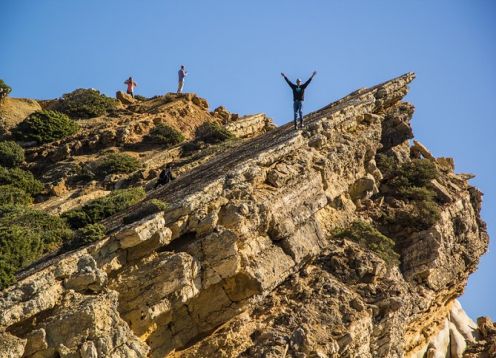 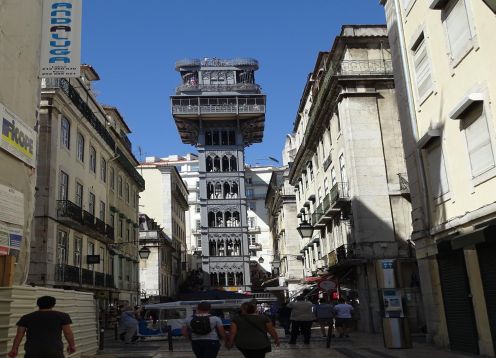 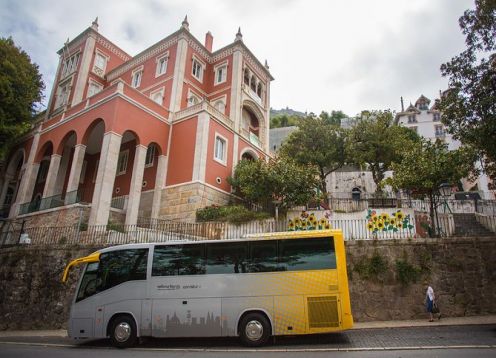 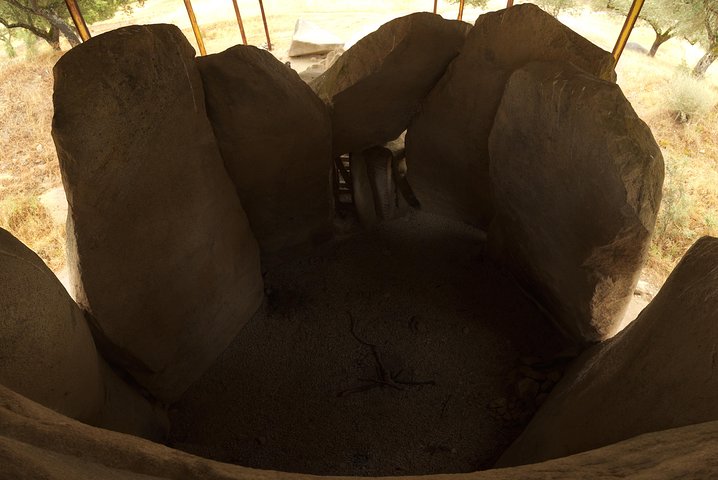 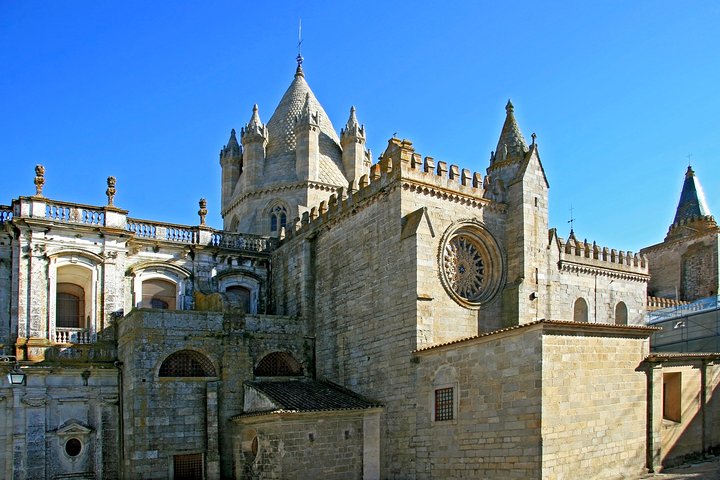 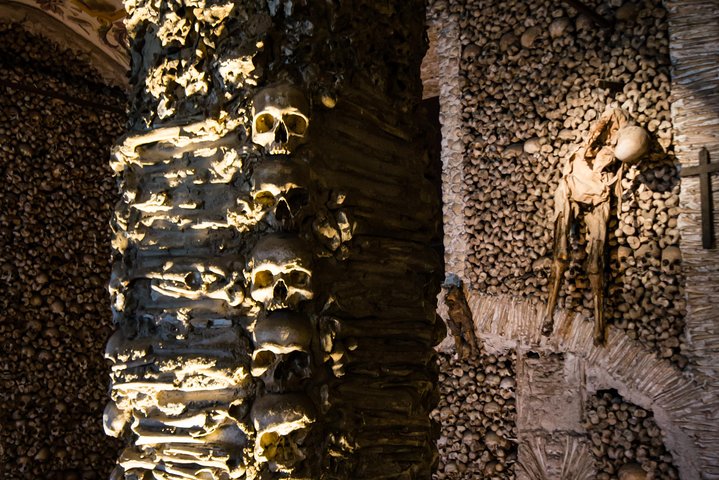 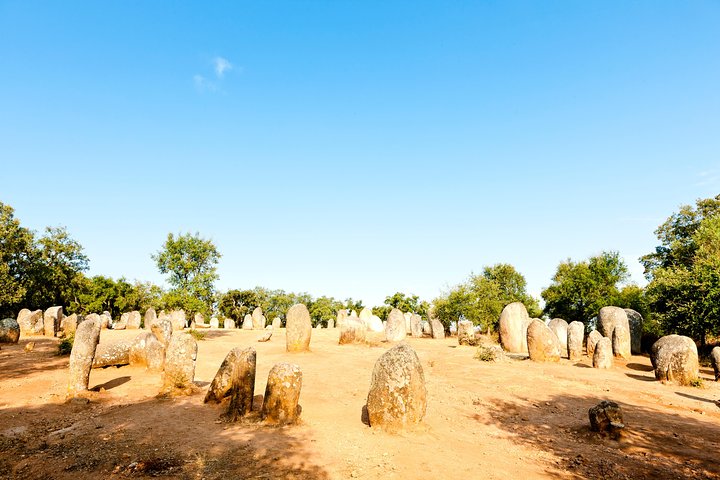 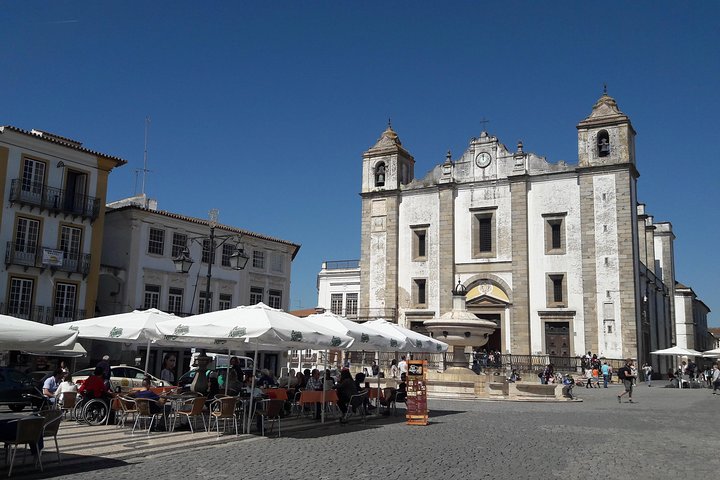 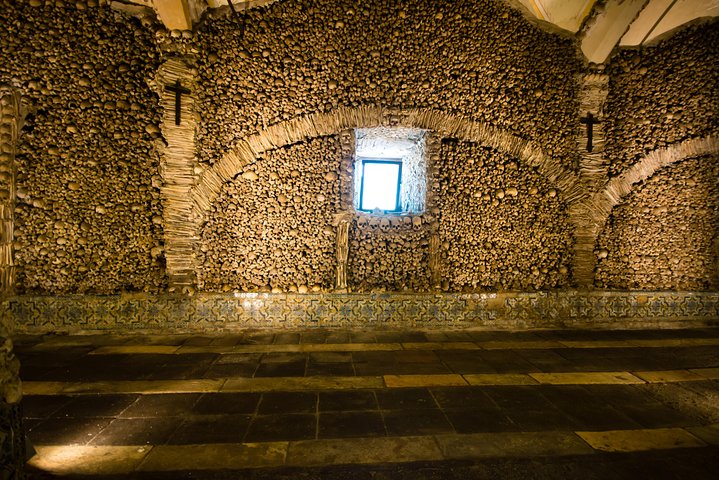 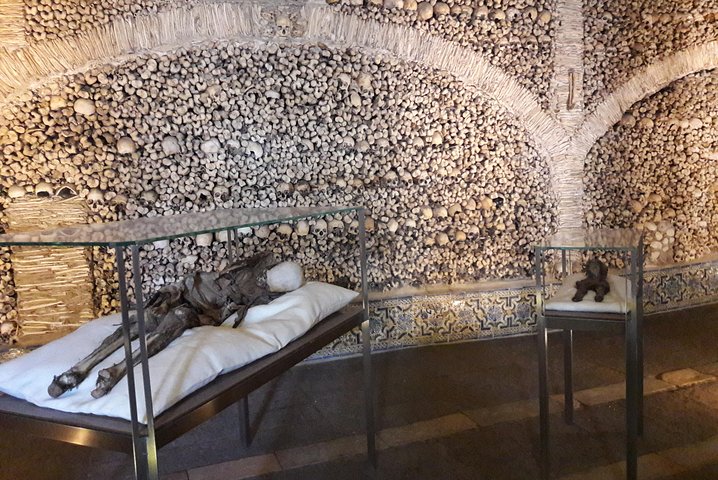 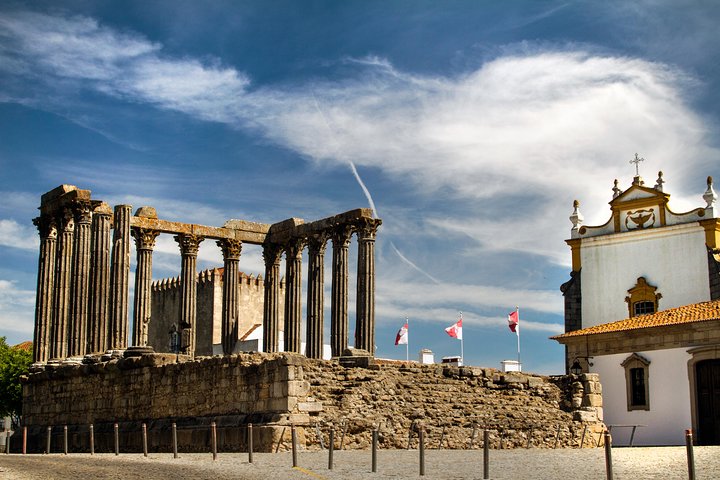 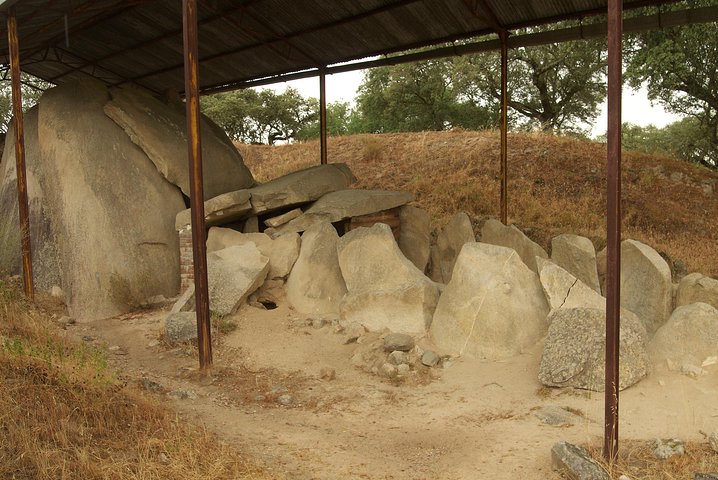 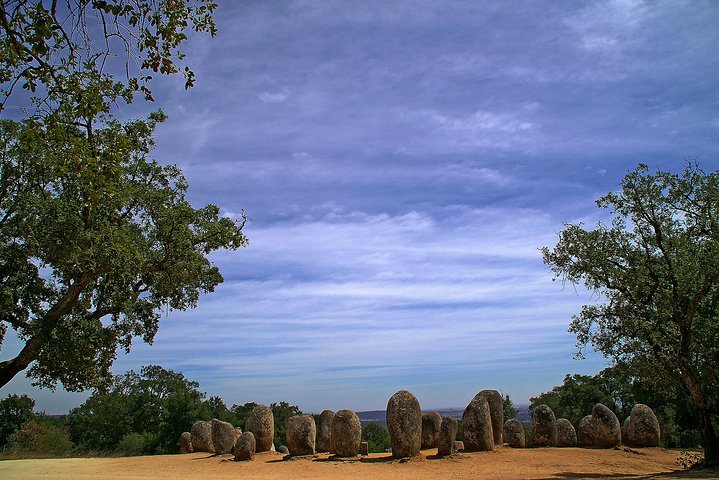 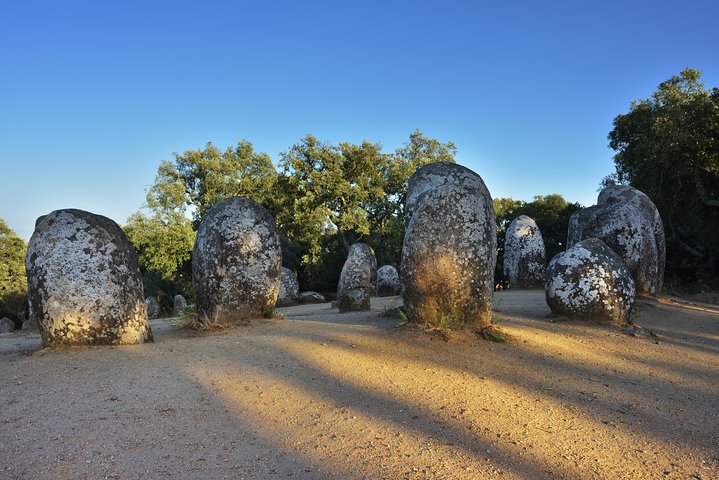 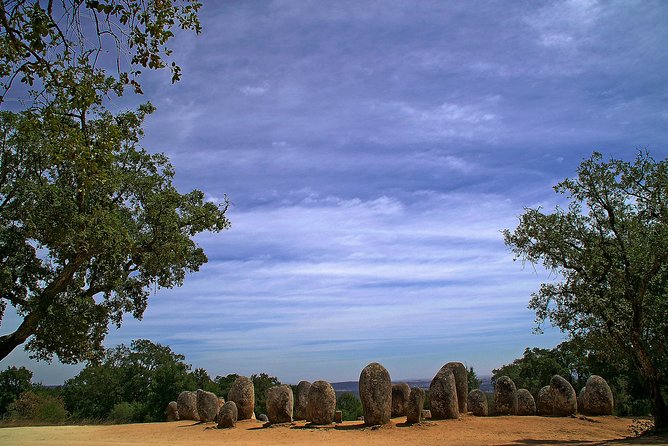 Unveil the secrets of the megalithic on a guided visit to prehistory in Alentejo: Almendres Cromlech, Almendres Menhir, Anta Grande do Zambujeiro (dolmen).

Évora, considered a World Heritage Site by UNESCO since 1986.

Here begins the preparation of your trip to this beautiful city in the heart of the Alentejo, the best way to visit this city is on foot, walking through narrow streets, white houses, to discover monuments such as the Roman Temple of Diana, built in the century II, the famous Chapel of Bones, Church of São Francisco, Évora

Going on the Megalithic Tour in Evora, a visit to the megalithic monuments in this region, means to go back thousands of years in time. In Evora district there are more than 10 megalithic sites, making this fenomenal testimony of prehistory in Alentejo one of the most important in the Iberian Peninsula and Europe altogether.

These prehistoric monuments go back to the Neolithic period (5500-4500 BC). Their location in in the outskirts of Evora because this region is the only place where the river basins of the most important rivers in the south of Portugal come together: Tagus, Sado and Guadiana. So, the Alentejo plains were ideal for the last communities of hunter-gatherers humans to practise their way of living.

We come across Almendres Menhir close to Almendres Cromlech, since they are intimately connected. Seen from the cromlech, the menhir indicates the sunrise in the summer solstice (the longest day of the year).

It has the shape of an elongated egg and has a crosier (staff) engraved in the top part. This form represents the importance of nature in the Neolithic, especially in what the domestication of animals is concerned.

Anta Grande do Zambujeiro is a dolmen, a collective funerary monument used to burry the dead. It is one of the biggest dolmens in the Iberian Peninsula. A large corridor leads to the chamber.

In this dolmen, it is still possible to see the tumulus, a protective cover usually made of soil and rocks. The granite props, around 20 ft (6 m) high, make it (probably) the highest dolmen in the world.

Topped by an imposing cathedral, Évora is laid out over a gently sloping hill rising out of the huge Alentejo plain. It guards its historic centre with a vast outer wall and represents a valuable cultural legacy that UNESCO has classified World Heritage.

The city, with its narrow streets of Moorish origin contrasting with squares where the light floods in, holds two millennia of hsitory. Conquered in 59 B.C. by the Romans, they named it "Liberalitas Julia". In this period, Évora gained great importance as can be witnessed from the remains of that time: the ruins of a fine temple dated towards the end of the second century, various parts of the wall and the gateway more recently called Dona Isabel in addition to the remains of thermal baths below what is now the Municipal Council building.

Little remains of the Visigoth period (5th - 8th centuries). There then followed the Moorish period begun with the city's conquest by Tárique. This lasted through to Christian reconquest in the 12th century. Yeborah, as it became known, had already received an indelible Moorish influence, most clearly seen in the Mouraria neighbourhood.

After the Reconquest, in addition to between the inner and outer walls, urban development moved beyond the city's walls. The city was home to the court of various Portuguese kings of the first and second dynasties. During this period it was endowed with various palaces and monuments, particularly during the reigns of kings João II and Manuel (15th and 16th centuries).

Wander its streets and absorb the secret soul that a diverse range of cultural influences has laid down in this city of the World. There are also excellent restaurants and bars, esplanades, arts and handicraft stores and the youthful nature of those attending its university all adding up to a dynamic of the present with its roots very firmly in the past.

One of the striking features of the façade is a church porch with arches of different styles - a typical example of the "marriage" between Gothic and Moorish style found in so many monuments of this region in Portugal. Over the Manueline doorway we can see the emblems of the kings that commissioned its construction - D. João II and D. Manuel I - whose emblems were the pelican and armillary sphere respectively.

One particularity of the Church is that it has a single nave, terminating in a ribbed vaulted ceiling, that has the largest span of all Portuguese Gothic architecture. On the sides we can see twelve chapels, all covered in Baroque carved woodwork. The main chapel, dating from the early 16th century, still maintains important Renaissance features such as the pulpits. It's well worth noting the harmonious decoration of stone, carved woodwork and azulejo tiles in the chapel of the third order, on one of the arms of the transept.

Inside, visitors can see the strange Bones Chapel, built during the Filippine period (17th-century). The pillars and walls are completely covered by bones. It's also worth noting the late Renaissance doorway where the capitals of the columns seem to be decorated in a different manner according to whether one is looking from the exterior or interior.

The Roman Temple, over 2000 years old, is the ex-libris monument of Évora and is one of the most important historic ruins in the country.

The Roman temple in Évora was built in the first century, during the time of Caesar Augustus. It has a long history, serving as testimony to many transformations and different uses over the centuries. It was practically destroyed when the Barbarians occupied the Iberian peninsular in the fifth century, and served as a bank vault and butcher’s to Evora castle in the 14th century.

Its original Roman design was only recovered in the 19th century, in one of the first archaeological interventions in Portugal. It is a testimony to the Roman forum of the city of Évora, consecrated to the Imperial cult, thus clarifying a 17th-century tradition that claimed that the temple had been consecrated to the goddess Diana. For this reason, it was identified for many years as the Temple of Diana. Recent excavations have shown that it was surrounded by a portico and water mirror.